Stanley Bullock was a suspect in the murder investigations of reenactment actor Joe Stanford in Open Wounds (Case #20 of Pacific Bay) and cabaret dancer Dinah Cooper in Hanging by a Thread (Case #24 of Pacific Bay).

In his second appearance, Stanley dons a gray blazer over a plain white shirt. In addition, he is shown to wear a blue and orange face paint, sport a carnival necklace around his neck, and have a Confederate badge on the left side of the blazer. It is discovered that he knows mechanics.

Stanley Bullock—a reenactment actor representing the Confederate side of the American Civil War—found himself in trouble when Frank and the player found Joe's photograph in which the Confederate actor was identified as Stanley, in which Frank suggested that neither Joe nor Stanley got along. Stanley told the team Colonel Dexter Blade was killed during the Battle of Pacific Bay, in which he defended his beliefs that he was not the one who fired the killing cannonball. Stanley told the team the history recorded regarding Dexter and the Battle of Pacific Bay may not be true, but told the team he played his part, using great care to ensure no danger was done to himself neither his fellow participants.

Chief Marquez ordered Frank and the player to protect the Blades' Estate as Stanley commenced an attack against the premise and given the act of aggression, Stanley was then a serious suspect in the murder investigation after he was told to cease fire. Stanley was hell-bent on exposing the truth behind the Battle of Pacific Bay by destroying the Dexter Blade fad, harboring beliefs that the Blades' Estate was a disgrace to the history of the United States, but Frank didn't hesitate to impound Stanley for the remainder of the investigation.

Stanley was let go after the killer was impounded for grand homicide, but found himself interrogated by Yann since he was a suspect during a murder investigation in which "The Puppeteer" was involved when Yann was 14 years of age, forcing the latter to commit an act of insubordination for his bid to put the coveted serial killer to justice. Chief Marquez had to apologize to Stanley for Yann's behavior, but what Stanley encountered in the hours following the killer's arrest would haunt him for the time being.

Stanley had to cooperate with the Pacific Bay authorities once again after Frank and the player found his cell phone at a luxury steamboat called The Abigail in which Hannah confirmed Dinah and Stanley had text message contact with each other. Hannah could not help but notice that Stanley and Dinah were neighbors as well albeit Frank did not believe a Confederate personality would be neighbors with a cabaret dancer, which were grounds for Frank and the player to approach Stanley for a conversation near the reenactment area. On a side note, Hannah pointed out Stanley was a suspect during an unsolved Puppeteer murder years before this case.

Stanley felt bad about Dinah's hardship due to being the sole guardian raising the now-parentless child, but Frank told Stanley that the Puppeteer was the one who murdered Dinah, which Stanley did not like to hear. Stanley remembered the past and would not hurt anyone using acts of violence in spite of him being a Confederate personality.

Stanley claimed that Dinah flirted him to do all the house chores and due to him constantly serving as the victim's chore tender, fell for Dinah. Dinah did not like Stanley's sexual advances, so she filed a restraining order against him, but apparently Stanley was upset when he had to cooperate with the police once again.

Thanks to Russell and his psychological expertise, the chapter of terror that haunted Jazz Town was finally put to an end, with Stanley proven innocent once and for all. 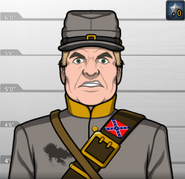 Stanley, as he appeared in Open Wounds (Case #20 of Pacific Bay). 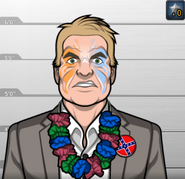 Stanley, as he apppeared in Hanging by a Thread (Case #24 of Pacific Bay). 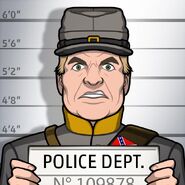 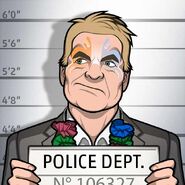 Retrieved from "https://criminalcasegame.fandom.com/wiki/Stanley_Bullock?oldid=413801"
Community content is available under CC-BY-SA unless otherwise noted.