Slash and Burn is a case featured in Criminal Case as the second case of Mysteries of the Past (Season 4) and the one-hundred seventy-third case overall. It takes place in the New Haven district of Concordia.

Isaac and the player went to a burning house after the fire brigade asked the Squad to assist in the evacuations. There, however, they found Irish immigrant Harriet Patrick stabbed to death.

Mid-investigation, Rivke Gelber attacked Mary Patrick in the market. Later on, the brigade informed the Squad that the fire in the crime scene could not be put out, potentially jeopardizing crucial evidence. Afterwards, Rivke said that Harriet's cow had tipped over an oil lamp, causing the fire. The duo later found enough evidence to incriminate butler Colin James as Harriet's killer.

Colin claimed innocence, but soon admitted to the murder. He said that Harriet had caught him stealing silverware and that she was going to report him to Oscar Trefusis. Not wanting to go back to jail and work on the treadmill, Colin caught up with Harriet and stabbed her 13 times with a switchblade. Judge Takakura sentenced him to 25 years in jail accompanied by work on the treadmill.

After the trial, the team assuaged Rivke, who then said that a man running from the fire had dumped a metal box in the market. Meanwhile, Evie said that Colin wanted to speak to the player.

Rose and the player went to the market and found a melted gas canister which (per Rose) came from the Concordian Police Department's evidence room. The two brought in evidence clerk Edward Whimple, who said that the evidence room was still on fire.

Meanwhile, Colin told Isaac and the player that Oscar was part of a scheme to use Irish immigrants for slave labor. The duo then searched Oscar's home, where they found a poster of Father Donovan asking help for Irish immigrants. According to Evie, someone used the poster to tell Oscar to go to Father Donovan for cheap Irish labor. Oscar said that he was hiring Irish immigrants because they asked for a lower salary than Concordian workers did.

The team later reconvened and determined they had to go to the evidence room, but only after the fire was put out.

Aidan Moran
Add a photo to this gallery

Edward Whimple
Add a photo to this gallery 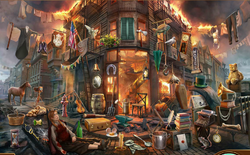 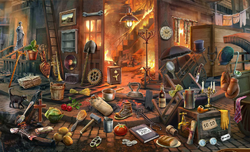 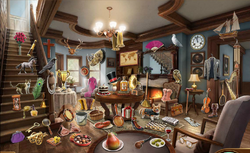 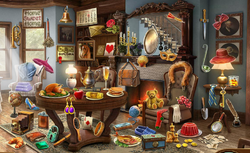 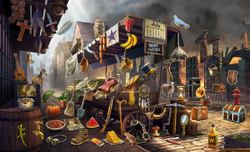 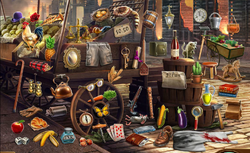 Vegetable Stall
Add a photo to this gallery

Retrieved from "https://criminalcasegame.fandom.com/wiki/Slash_and_Burn?oldid=512530"
Community content is available under CC-BY-SA unless otherwise noted.