Sinners and Saints is a case featured in Criminal Case as the nineteenth case of Mysteries of the Past (Season 4) and the one-hundred ninetieth case overall. It is the first case to take place in the Sinner's End district of Concordia.

Maddie and the player went to Paddy Whack's, a pub in Sinner's End, to investigate Mad Dog. Dermot McMurphy, the pub's owner, reported that someone dumped a body at the streets behind the pub. Outside the pub, they found the beaten body of doctor Barnaby Wilson.

During the investigation, the player accidentally unlocked a trapdoor to an underground fight club below the pub. Later, the team stopped a fight between Isaac and a drunk man. The team gathered enough evidence to arrest fighter Kev O'Connell for the murder.

Kev denied involvement but soon admitted to the crime. While he also admitted to be part of Mad Dog's gang, he said that he punched Barnaby to death with brass knuckles because the doctor was engaged to his beloved Marla de Paradis. He then branded Barnaby with a shamrock-shaped iron for good luck. Judge Lawson sentenced him to 20 years of forced labor in Stonewall Prison, without parole.

Post-trial, Isaac and the player interrogated Kev about Mad Dog's gang. Kev let slip that Mad Dog frequented the cabaret street, where they found an Irish flask. Evie confirmed it belonged to Marla, who revealed that Mad Dog's name was Finley Flanagan. She said that Finley controlled the prostitution business in the district while his sister, Fiona "The Viper", controlled the alcohol business.

Meanwhile, Rose and the player investigated Dermot's involvement in the fighting club. In the club, they found a book which (per Evie) showed that the club was organizing illegal deadly fights. As Dermot denied involvement, they investigated his pub to find a money bag, which turned out to be Dermot's dead pool profits. Upon arrest, Dermot said that Mad Dog promised him protection if he allowed his gang to use his pub.

Mayor Cornelius Castletown then decided to impose an alcohol ban in Concordia to lessen crime rates, trusting the Squad to enforce it starting with Sinner's End. Chief Wright then told the team to head to Scarlet Road, the brothel quarter of Siner's End, to investigate Finley.

Frederick Wilson
Add a photo to this gallery 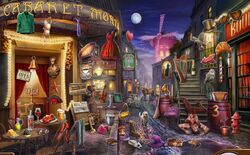 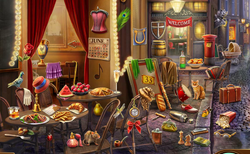 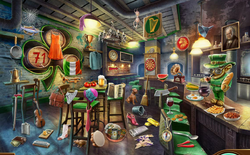 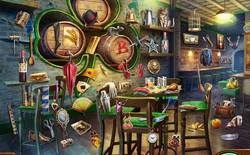 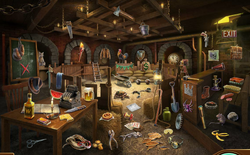 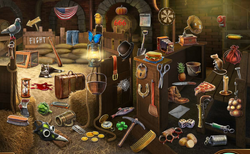 Fight Club Stalls
Add a photo to this gallery

Retrieved from "https://criminalcasegame.fandom.com/wiki/Sinners_and_Saints?oldid=530200"
Community content is available under CC-BY-SA unless otherwise noted.