Sidney Hirsch was the killer of agent Jonathan Stafford in Politically Incorrect (Case #53 of World Edition).

Sidney is the 57-year-old director for the Department of Homeland Security. He has grey hair and beard and wears a pair of rectangular glasses. He dons a midnight grey suit over a black waistcoat, a light bluish-grey dress shirt and a plaid scarf around his neck. It is known that Sidney hunts, goes to rodeos and eats kuchen.

When the team first landed, Sidney approached them saying there had been a murder by the lake. He identified the victim as a secret service agent assigned to protect the President, one Jonathan Stafford. He confirmed the president was safe and was in a secure location, but left afterwards to ensure security was at its maximum.

Sidney became an official suspect after the player and Jack found the victim's notice of suspension, which he signed despite saying the victim was still on active duty. He explained the papers were given this morning, and people still thought he was in charge of the President's security. The victim got too attached to his detail subjects, which Sidney said is dangerous in their line of work. Plus he saw Jonathan get friendly with the President, which makes people sloppy, so he decided to take care of it before things got out of hand.

Sidney was spoken to again regarding top secret documents he compiled about the victim, most of which were blacked out. He explained the victim was having an affair with a top level official of the administration, which could have compromised national security. While he could not say since that info was classified, he suggested they search the conference room in order to find out, so they decided to have another look around the conference room.

In the end, Sidney was revealed to be the one responsible for Jonathan's murder. Initially denying involvement, Sidney admitted that he had shot the man he loved. He said that he was jealous because of Jonathan's affair with First Lady Olivia Hewett and that he had confessed his feelings to him while having lunch. When Jonathan had pushed him away and called him old, Sidney shot him in the chest with his rifle and tried to resuscitate Jonathan after realizing what he had done. Consequently, Judge Adaku sentenced him to 18 years in jail.

After the trial, they spoke with Sidney again in order to access the space command center at Camp Rushmore, so they could retrieve their satellite and the proof of SOMBRA's existence within it. Though he was uncooperative at first, when SOMBRA was first mentioned he was shocked. The name kept popping up, though the President refused to authorize an investigation into the matter. He said his access codes were in his red notebook, which was at the camp entrance where he was arrested, so they decided to search there to find it. 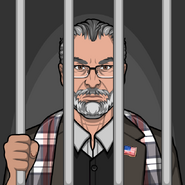 Sidney, sentenced to 18 years in jail for the murder of Jonathan Stafford. 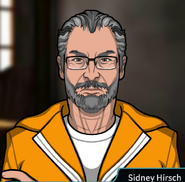 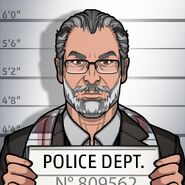 Retrieved from "https://criminalcasegame.fandom.com/wiki/Sidney_Hirsch?oldid=461326"
Community content is available under CC-BY-SA unless otherwise noted.