Sid Montrose was a suspect in the murder investigation of jazz musician Elmer Buttons in After the Storm (Case #18 of Pacific Bay).

Sid is a 60-year-old Jazz musician of African-American heritage with a pair of brown tinted glasses over his brown eyes, and a black Afro which trails down to form his black beard and moustache. Sid dons a purple suit with a black shirt and golden tie underneath and golden buttons, and is always seen carrying a trumpet with him. On his right hand, he sports a fundraiser stamp which takes the form of a saxophone. It is known that Sid knows music, owns a storm survival kit and eats beignets.

Sid is a jazz musician.

Sid was in trouble when Amy and the player found a bullet-pierced record during a trip to the Jazz Club, in which a threatening message was revealed by the player. After careful analysis of the record, Hannah suggested Amy and the player that they should interrogate Sid as per Amy Sid was not a fan of Elmer's music. Sid suggested that Elmer's music replicated the destructive force of Hurricane Yves, but had a storm survival kit to protect his jazz efforts from such.

Sid was interrogated a second time immediately after Carly Lewis announced him as the winner of the Best Living Jazz Musician Award as the player took Sid's rivalry towards Elmer seriously. Sid did not like living in Elmer's shadow year after year and took advantage of Elmer's death to win the award, but Amy did not buy Sid's words assuming Sid rigged the Jazz Musician segment to win the award but Sid abstained to put up with Amy after he realized she used a jazz slang book to interrogate him.

Sid was not cooperative to the authorities during the investigation, but was not guilty when the killer was apprehended for Elmer's murder. 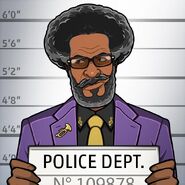 Retrieved from "https://criminalcasegame.fandom.com/wiki/Sid_Montrose?oldid=465928"
Community content is available under CC-BY-SA unless otherwise noted.