Dr Shweta Noorani (Hin: श्वेता नूरानी) was a suspect in the murder investigations of university student Sunil Dhudwar in Plagued by Death (Case #21 of the World Edition) and botanist Wendy Stokes in In Cold Blood (Case #35 of The Conspiracy), where she was arrested for her crimes related to DreamLife. While in prison, she murdered former CCN reporter Louis Leroux in Breaking News (Case #54 of The Conspiracy).

Shweta is a 43-year-old now-former scientist who has black hair and brown eyes.

In her first appearance, then 41 years old, Shweta was the head of the Science Department of Jayamahal University in Bangalore. She is seen wearing earrings, red tilaka mark and red glasses. She dons a red shirt underneath a lab coat, and a blue and yellow dupatta around her neck. On her lab coat, she has a university badge and an elephant brooch. It is known that Shweta eats spicy food and drinks mango lassi.

In her second appearance, now a scientist for DreamLife, Shweta ditches the elephant brooch and has replaced her university badge for a DreamLife badge. Furthermore, the pattern on her dupatta has changed. It is discovered that she has dandruff, is a climber and drinks iced tea.

In her third appearance, she sports an orange prison uniform with a white shirt. It is revealed that she knows chemistry, works out and uses Duck soap.

Shweta became a suspect after the player and Jack identified her on a computer at the victim's university. She was shocked to hear Sunil was injected with the virus, but not so much at the fact that it was man-made, especially considering her claiming she and the victim made it. Jack was angered at hearing she was responsible for creating the virus, but Shweta said it was never supposed to leave and only university students and staff could get in. She was not aware it was gone until the epidemic, and had been spending her time trying to find a cure since. After her interrogation, Jack pondered on the fact she pointed out only students and staff of the university could get in, and there was no report of a break-in. This meant that Sunil's killer had a university access badge.

Shweta was interrogated again regarding a message she received from O.M. MediLab, which according to Dupont, was a bribe to test the virus she made. She said she was contacted by O.M. MediLab a year ago requesting her to test an antiviral drug they wanted to commercialize. However, she quickly realized the drug could breed a brutal virus, so she isolated the dangerous components of it and created a pure super virus. When suggested she caused the epidemic with Sunil's murder, she said she refused to test the virus on humans and she did not accept the bribe.

Shweta was found to be innocent after the team incarcerated Ayush Patil for Sunil's murder, as well as for unleashing the virus. However, she was interrogated by the player and Angela about blood from someone immune from the virus found at the university. She said the vial probably fell out of her bag, she wished to test if it was immune, and she was going to share her findings with The Bureau afterwards. Shweta said she was going to try mixing the blood with a plant called Gloriosa superba, which was located in the botanical gardens. This prompted the player and Angela to investigate the botanical gardens another time in order to find the plant.

Shweta met the player again, along with Gloria, after two years as a suspect after the team found her ID badge at the DreamLife's outdoor gym. When being asked about her role in the human experimentation happened in DreamLife, Shweta said that there was no human experimentation going on. Then, after being informed of Wendy's death, Shweta was shocked, but she told the team that she had nothing to do with the murder.

Shweta was spoken to again after the team found out that she had ordered Wendy to meet her in Lab 88-B, the experiment room where Wendy was found dead. When being asked about this, Shweta explained that she did ask Wendy to lab 88-B, but it was to see how Wendy's research was going, as horticultural findings played a crucial role in her work. In the end of the conversation, Shweta denied telling the team what exactly was going in lab 88-B and told them that she certainly had not hurt anyone.

Later, although Shweta was found to be innocent of Wendy's murder directly after the team found out that Rosie Summers was Wendy's killer, it was discovered that she was involved in the murder. The team then went to arrest her for killing Wendy indirectly and for her involvement in human experimentation. During the arrest, Shweta admitted that DreamLife wanted Wendy dead after discovering her plans to leave the dome. She also said that there was an awaiting shipment of Protozane, and that the drug had no antidote.

Shweta was spoken to again about the model virus she had given to the victim. She explained that Louis had ruined her life as he had been the one to report that she had created the virus outbreak in India, destroying her career. The only company that would take her on after the scandal was DreamLife, subsequently leading to her arrest.

In the end, it was proven that Shweta was Louis' killer. Upon confessing to the murder, Shweta said the real leader of Ad Astra, a "puppeteer" more powerful than Louis and the other four, had realized Ad Astra was outliving its usefulness and so was planning to kill each of the members one by one, starting with Louis. The "puppeteer" ordered Shweta to kill Louis, and so she filled the light bulb in Louis' cell with smuggled nitroglycerin and waited for Louis to turn it on and get blown up. Seeing that Shweta had only admitted to the "puppeteer" being a good friend of hers, Judge Powell sentenced her to 30 additional years in prison. 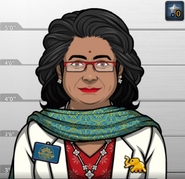 Shweta, as she appeared in Plagued by Death (Case #21 of World Edition). 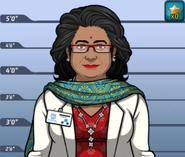 Shweta, as she appeared in In Cold Blood (Case #35 of The Conspiracy). 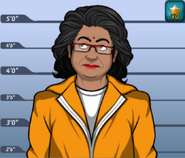 Shweta, as she appeared in Breaking News (Case #54 of The Conspiracy) and wearing the prison uniform. 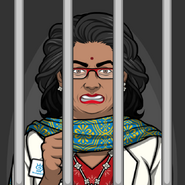 Shweta, arrested for masterminding and overseeing human experiments and multiple deaths for DreamLife. 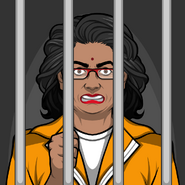 Shweta, sentenced to 30 years in prison (in addition to her original sentence) for the murder of Louis Leroux. 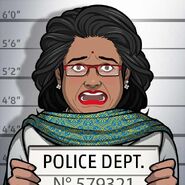 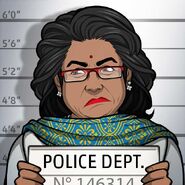 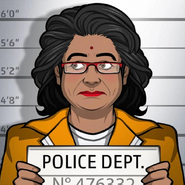 Retrieved from "https://criminalcasegame.fandom.com/wiki/Shweta_Noorani?oldid=466233"
Community content is available under CC-BY-SA unless otherwise noted.