Shirō Watanabe (Jpn: 渡辺四郎), appearing as a minor character in Criminal Case, was mentioned in A Death Wish (Case #29 of World Edition).

Shiro was the nephew of yakuza leader Yuto Watanabe and the fiancé of Emily Wallace. He had black hair and wore a black suit with a gray shirt.

Formerly, Shiro was part of the yakuza with Yuto, who was his uncle. Shiro left the yakuza and took some of their money to marry Emily, but was shot dead by Yuto during the wedding ceremony. Shiro's death prompted Emily to seek for vengeance, fulfilling her wish when she killed Yuto by shooting him in the head with Shiro's old gun. 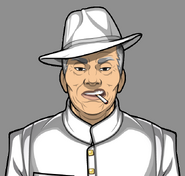 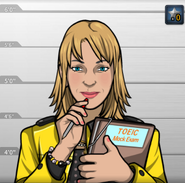 Emily Wallace, Shiro's fiancée.
Add a photo to this gallery

Retrieved from "https://criminalcasegame.fandom.com/wiki/Shiro_Watanabe?oldid=502918"
Community content is available under CC-BY-SA unless otherwise noted.