Sheila Margaret Black was the killer of businessman Maximillian Poe in Shear Murder (Case #5 of Mysteries of the Past).

Sheila is the 33-year-old friend to the late Maximillian Poe. She has curly black hair with a white hairband with a flower. She dons a dark blue dress with a blue paisley motif, and a necklace. It is known Sheila uses mothballs, knows calligraphy and takes hansom cabs.

Sheila became a suspect after the player and Isaac found her fingerprint on a cake server found at the crime scene. She was shocked to hear of Maximillian's death, saying it was already bad enough he lost his wife. She explained the two were friends for a long time, and the victim had been so unhappy since his wife's death that he saw the doctor twice a week. All she was able to do was be there for him, and never thought it would end like this.

Sheila was spoken to again regarding makeup found on the victim's cravat, which looked similar to what Sheila had on her. She explained the two of them went to a ball, and when she leaned over to kiss him Maximillian pulled away, causing her to fall on him. Isaac had doubts if it never went anywhere beyond a friendship, but Sheila became offended saying she would never harm Maximillian, let alone jeopardize their friendship.

At the climax of the investigation, it was revealed that Sheila was behind Maximillian's murder. Sheila admitted to the murder, saying that she had loved Maximillian for many years. After his wife, Valeria Poe, died, she tried to get his love, but he refused her advances. She was pushed to her limit when she found out he was starting to like his cook, Audrey Scott. Thinking that nobody but her could have Maximillian, she stabbed him with the shears and stole his ring to make it look like a robbery. Judge Takakura sentenced her to life in prison.

Later in prison, the player and Dick spoke with her again about the possibility she was behind the death of Maximillian's wife, Valeria, as well. Seeing as though she already had a life sentence, she did not bother to hide it and confessed she killed Valeria. She said that once Valeria showed up, Maximillian became smitten with her and Sheila was forgotten. So she became friends with Valeria, and when the latter became ill she slipped a dash of hemlock into her wine, killing her. With that, she hoped she and Maximillian would be together, but as they know that did not turn out as well as she hoped. 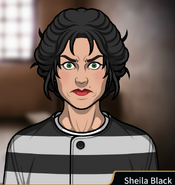 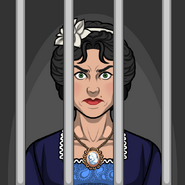 Sheila, sentenced to life in prison for the murder of Maximillian Poe. 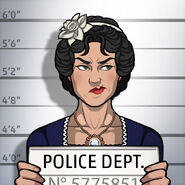 Retrieved from "https://criminalcasegame.fandom.com/wiki/Sheila_Black?oldid=465427"
Community content is available under CC-BY-SA unless otherwise noted.