Shear Murder is a case featured in Criminal Case as the fifth case of Mysteries of the Past (Season 4) and the one-hundred seventy-sixth case overall. It takes place in the New Haven district of Concordia.

Commissioner Talmadge Baldwin informed Chief Wright of Maximillian Poe's murder, prompting him to dispatch Isaac and the player to the greenhouse, where they found the victim stabbed in the chest with garden shears.

Mid-investigation, Father Donovan, thinking that Maximillian had committed suicide, admitted that he had "killed" the victim. Later on, Evie found out that Maximillian had changed his last will and testament two days before he died. The team later found enough evidence to arrest the victim's friend, Sheila Black, for the murder.

Sheila admitted to the murder, saying that she had loved Maximillian for many years. After his wife, Valeria Poe, died, she tried to get his love, but he refused her advances. She was pushed to her limit when she found out he was starting to like his cook, Audrey Scott. Thinking that nobody but her could have Maximillian, she stabbed him with the shears and stole his ring to make it look like a robbery. Judge Takakura sentenced her to life in prison.

After the trial, Isaac and the player went to the church to dig up on Father Donovan's past. There, they found an old mugshot of Donovan, whose numbers Evie used to uncover that Donovan committed murder. Because Donovan's criminal records were destroyed in the city fire, Isaac and the player talked to him, where he said that he turned to God during his sentence. Furthermore, he said that he only got the mugshot because it turned up on his church's door.

Meanwhile, Dick and the player went to the hospital to find out more about Valeria's death. There, they found Valeria's scarf, which (according to Viola) was stained with chianti laced with hemlock. After informing Dr Ezekiel Jones of the poisoning, the cops learned from Audrey that Valeria's last dinner was held in the greenhouse. There, they found out that the poisoned chianti was given by Sheila, who admitted to the murder in prison. After Sheila said that she killed her to get rid of her, the cops told Valeria's brother, Vincent Lorenzo, the truth. Vincent then revealed that the aforementioned last-minute change to Maximillian's will entrusted his money to Valeria's family, but Vincent refused to take any of it.

After all the events, the team decided to investigate into Donovan's possible involvement in the Irish enslaving scheme as well as the city fire.

Vincent Lorenzo
Add a photo to this gallery 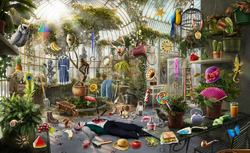 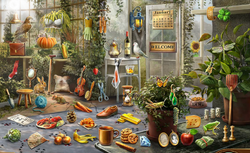 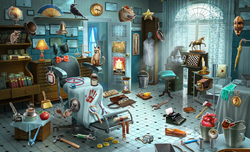 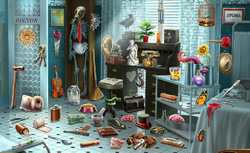 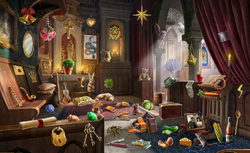 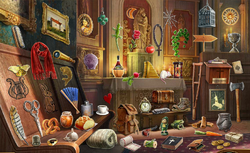 Church Bench
Add a photo to this gallery

Retrieved from "https://criminalcasegame.fandom.com/wiki/Shear_Murder?oldid=529056"
Community content is available under CC-BY-SA unless otherwise noted.