Shawna Knox was the killer of waiter Lee Dupree in Bayou Blood (Case #6 of Pacific Bay).

Shawna is a 17-year-old African-American waitress at the Gumbo Jumbo seafood restaurant. Shawna sports brown skin, dons a gray shirt with a shrimp logo on it, sports braided afro-style, neck-length hair, has brown eyes, and also sports a Gumbo Jumbo name tag on the left side of her shirt. Shawna also sports suspenders and wears shells in her hair. It is known that Shawna is in contact with shrimps, chews tobacco and uses foot cream.

Frank and the player first ran into Shawna when they found an order pad at the Gumbo Jumbo restaurant, grounds for Russell to psychologically analyze it, from which he concluded that there was only one female server working at the seafood restaurant, who happened to be Shawna. Shawna was infuriated when the team approached her about Lee because Lee labeled her as a scapegoat to make her life a hell by making fun out of her. Lee almost caused Shawna to be fired by blaming her of his cash register mistakes and, if she lost her job, she would have lost everything since she had to go through the pressure of providing her family with money since her father passed away.

Later on, the team talked to Eugene after finding his diary at Bill Farnham's voodoo shop and revealed to be his drawing of Shawna being protected by him from Lee. Eugene would not kill Lee to defend Shawna although Eugene had to do something to keep Lee away from Shawna given his wanton bullying record, but Eugene felt Lee was also trying to sexually harass Shawna by kissing her, which prompted a second talk with Shawna, not to mention a love potion analyzed by the team earlier on was made for Shawna. Shawna felt Lee was not behaving at his age not to mention admitting Eugene had a crush on her but did not want her line of work to be disrupted since she was about to start her shift at the time the team wanted to talk to her.

It was later revealed that Shawna was responsible for Lee Dupree's murder. Shawna claimed to kill Lee in self-defense because Lee kept flirting with her, even though Shawna did not like it, so she carried BBQ skewers for protection. When Lee tried to sexually assault Shawna, she killed him with the BBQ skewers and blamed Bill by stabbing Lee in the heart with the skewer and pinned him to the tree. Judge Dante ordered Shawna to be placed in an institution for violent minors. 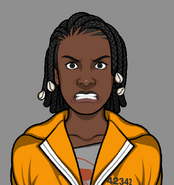 Judge Dante accepted Shawna's plea of manslaughter at the expense of her sent to an institution for violent minors for the murder of Lee Dupree and for obstructing justice by framing voodoo users of homicide. 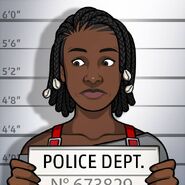 Retrieved from "https://criminalcasegame.fandom.com/wiki/Shawna_Knox?oldid=503177"
Community content is available under CC-BY-SA unless otherwise noted.