Shaun Crosby was a suspect in the murder investigation of his father, war veteran Henry Crosby, in Bomb Alert on Grimsborough (Case #13 of Grimsborough).

Shaun is a 27-year-old army veteran with crew-cut black hair and green eyes. He wears a camo outfit. On the left sleeve of his camouflage uniform, he wears a stitched on American flag. It is known that Shaun wears orthopedic shoes, is partially deaf and is an explosives expert.

Shaun appeared in Bomb Alert on Grimsborough when the police informed him about his father, Henry Crosby's death. Later during the investigation, Jones and the player discovered that Shaun had written a letter to Greene Banking in which he threatened them. When the team asked him about this, Shaun said that the Greene Banking wanted to buy the Eastfield Market, but the stalls owners refused his offer. Since most of the stalls owners took loans from Greene Banking because of the crisis, the bank started raising their interests and the stalls owners would be forced to sell their stalls, which was exactly what Alden Greene wanted. During the investigation of his father's murder, several pieces of evidence pointed towards Shaun, but later on, he was proved innocent after Donald Byrd was revealed to be the killer.

During the Additional Investigation of this case, Shaun requested the team's help to find his father's Silver Star medal. The team then searched for it thoroughly and found it broken to pieces. They managed to piece it back together, as usual, and then gave it to Shaun so that he could bury his father in peace. 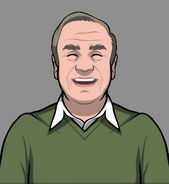 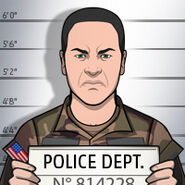 Retrieved from "https://criminalcasegame.fandom.com/wiki/Shaun_Crosby?oldid=408855"
Community content is available under CC-BY-SA unless otherwise noted.