Sharon White was a suspect in the murder investigation of ski jumper Anjulie Cruz in Leap of Death (Case #25 of Pacific Bay).

Sharon is a 25-year-old ski jumper with brown hair and green eyes. She wears a gray winter cap and green goggles, as well as a silver nose ring. She also sports a green-and-orange jacket with a gray shirt underneath. Besides that, she dons a green scarf and blue skis held by her black gloves. It is known that Sharon has a snow mobile and eats fondue.

Sharon is one of the female ski jumpers who strived for gender equality in the winter sports world.

Sharon was flagged as a suspect in Anjulie's murder investigation after Amy and the player found an encouragement card written from Sharon addressed to Anjulie. Sharon was heartbroken knowing what happened to Anjulie. Sharon fought hard alongside Anjulie to allow women to compete in professional ski jumping. Through their cause, they got Anjulie to became the first female athlete to make the first ski jump in an official sports event. Sharon was mad and hurt about Anjulie's death, saying it was a tragedy for women's sports.

Sharon was in trouble after Amy and the player found a torn Today magazine article naming Anjulie the female athlete of the year. The player pieced the magazine back together and found out that Sharon scribbled on the magazine, suggesting Sharon had a rivalry with Anjulie even though they were both advocates for gender equality in winter sports. Sharon believed she was a better skier than Anjulie but she was forced to be a backup skier. Sharon was jealous because she felt that she deserved to be the main ski jumper instead of Anjulie. She felt Anjulie was only chosen to be the main skier because of her looks.

Sharon was proven innocent after Sven Blattner was arrested for the murder, but Chief Marquez wanted Amy and the player to tend to Sharon hours after the case's closure as reports of Sharon being harassed by someone reached the Chief's desk in response to avoid another scandal.

Amy told Sharon that the Night Walker was spying on her at the Hot Springs, to which Sharon replied and confirmed that the legend was real. After the team checked up on Sharon, Amy and the player found Claire Cambridge guilty of damaging Sharon's equipment, particularly her ski goggles. 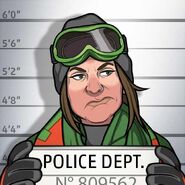 Retrieved from "https://criminalcasegame.fandom.com/wiki/Sharon_White?oldid=413825"
Community content is available under CC-BY-SA unless otherwise noted.