Sharon is a 28-year-old psychologist. She has brown hair which she puts into a bun, glasses and pink earmuffs. She dons a light blue sweater with a picture of a chibi-fied penguin on it with the words "FREE HUGS", and a badge of Antarctica. She usually carries around a clipboard and an inkblot. It is known that Sharon eats beef jerky and goes kayaking.

Sharon became a suspect after the player and Jack found that she scheduled an appointment with the victim. She was terribly shocked to hear of Julia's death, saying she was such a positive person full of enthusiasm about her work. According to Sharon, the victim had no emotional troubles, she just schedules regular sessions with everyone working at the research station.

Sharon was interrogated again regarding the victim's psychological evaluation. According to Marina, the victim's brainwave pattern and Rorschach test were normal; but Sharon recommended Julia to take shock treatment. Worried about Sharon's mental state, Marina decided to aid the player in interrogating her. Sharon believed that Julia required drastic help despite the normal report, mainly due to how the victim went on about the consequences of global warming and the danger to the environment. She was convinced that the victim was cracking under the pressure, and felt she needed the proper treatment immediately.

Sharon was found to be innocent after Blair Carpenter was arrested for Julia's murder. 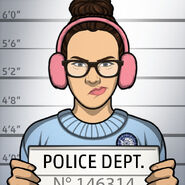 Retrieved from "https://criminalcasegame.fandom.com/wiki/Sharon_Jeung?oldid=408869"
Community content is available under CC-BY-SA unless otherwise noted.