Sharon was a 19-year-old girl with chin-length wavy brown hair and brown eyes. At the time of her death, she donned a white t-shirt with the logo of Space and Aeronautics Research Agency (S.A.R.A.) in the middle, a pair of blue jeans and white sneakers.

Sharon's body was found by Luke and the player with an infinity symbol carved into her arm. They deduced that she had died after being pushed over a bridge. Ben found distinct trauma marks on her shoulders and chest, proving that the killer had pushed Sharon over the bridge's railing. After noting that the symbol had been carved into Sharon's arm before the murder, Ben revealed that he had discovered traces of aluminium hydroxide, a major ingredient in antacid treatments, on her shoulders. This led Ben to conclude that the killer had heartburn.

Later, Gwen and the player found a bloody knife near the crime scene and sent it to Priya, who found traces of hydroxen peroxide used for disinfecting earrings on the blade's handle. This enabled Priya to conclude that the killer wore earrings.

Sharon was in a relationship with Andrew Lodge. She was annoyed with him after he refused to come with her for a romantic walk due to his heartburn. Her sister, Moesha Decker, wrote Andrew a seemingly innocent Valentine's Day card, leading Sharon to believe that Moesha was trying to seduce Andrew. Sharon had a pet chicken named Rosie, whom vampire Fabien de la Mort had stolen for blood the night before her murder. Sharon had discovered Valentine's store owner Ace Boome's true identity as Cupid after catching him brushing his wings, which led her to pester him to use his magic on her and Andrew, enraging Ace. Sharon had also catfished witch coven leader Morgana Blackhawk by posing as a man named Aiden on Timber, angering the latter after she found out that "Aiden" was in fact Sharon. Morgana then hexed Sharon out of retaliation.

The killer turned out to be Andrew.

Andrew admitted that Sharon wanted the two of them to kill themselves in a Valentine's Day suicide pact so they could be together for all eternity. After carving the symbol into her arm, Sharon gave him the knife but he refused to follow her. In the ensuing struggle, Andrew shoved her off the bridge. The team handed him over to the local authorities, speculating a lenient sentence given the circumstances. 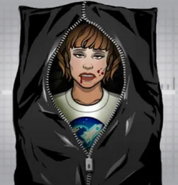 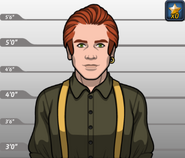 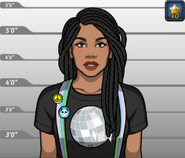 Moesha Decker, Sharon's sister.
Add a photo to this gallery

Retrieved from "https://criminalcasegame.fandom.com/wiki/Sharon_Decker?oldid=522957"
Community content is available under CC-BY-SA unless otherwise noted.