Captain Shane Redfern was the killer of flight attendant Dolores Zamora in Dearly Departured (Case #49 of The Conspiracy).

Shane is a 62-year-old pilot working for Osprey Airlines with brown eyes, short gray hair and gray mustache. He is seen wearing a standard white pilot uniform with two fronts pockets and an Osprey Airlines' golden lapel on the left side. He also wears a matching pilot cap, a black tie, black pants and black shoes. Additionally, he sports wrinkles and eyebags on his face. It is known that Shane reads Cloud Mall, speaks Spanish and takes Saved by Flowers.

Shane became a suspect after Jones and the player found a cardboard cutout featuring him and the victim. Shane said that Dolores had been a supremely dedicated member of his crew for many years. After telling the team that he could not imagine anyone hurting her, he told them that Dolores had a room rented year-round at the Tairom Hotel adjacent to the airport, to which the team headed to investigate.

Later, the team found surveillance footage of Shane slapping Dolores's bottom and Dolores slapping Shane in retaliation. Upon interrogation, Shane downplayed the entire situation, telling the team that he had forgotten his manners due to the stress tincture he was taking to relieve his nerves on the flight.

The team then found enough evidence to find Shane guilty of the murder. Upon admitting to the murder, Shane said that Dolores threatened to tell a journalist about the naps he was taking in the cockpit mid-flight if he were to harass her again, which would guarantee him of getting fired. He did not want to risk it, however, as he still had to put his two sons through college. When the threat solidified after Dolores had told him that she was meeting with the journalist upon landing, he laced the smoothie that she ordered in the bar with Pest-B-Gone. Judge Powell sentenced him to 25 years in prison.

Soon after, his sons kidnapped Judge Powell for heartlessly misjudging him. Rita and the player then found Powell and arrested his sons. 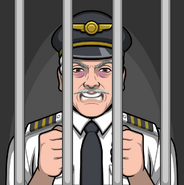 Shane, sentenced to 25 years in prison for the murder of Dolores Zamora. 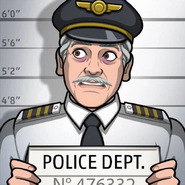 Retrieved from "https://criminalcasegame.fandom.com/wiki/Shane_Redfern?oldid=498548"
Community content is available under CC-BY-SA unless otherwise noted.