Queen Shabaka (Egy: 𓆷𓃝𓂓) was a suspect in the murder investigation of her husband, Pharaoh Ramses XLIII, in Fool's Gold (Case #20 of Travel in Time), prior to which she was mentioned during the events of four cases in Travel in Time.

Shabaka is the 51-year-old wife of the victim, and the queen of the Ptolemy Dynasty in the altered timeline of 2029. She has neck-length wavy black hair and brown eyes. She also sports blush, deep turquoise eyeshadow and gold lipstick. She wears a black robe draped over a blue-and-gold dress, along with an elaborate golden headpiece with turquoise and blue details. She also sports a matching winged crown, a matching scarab necklace, as well as shoulder pieces and matching earrings. It is known that Shabaka knows electronics, uses coconut oil and is an insomniac.

When the team returned to 2029, they were shocked to discover that they had returned to an alternate time stream in which Shabaka ruled, alongside Ramses XLIII.

After arresting Chief Scott's killer, Jack and the player dug into the history of the Ptolemys. They discovered (per Orlando) that the Ptolemys were direct descendants of Cleopatra and Mark Antony.

After arresting Storm Huxley's killer, the team attended the 5th of July celebrations at Anubis Square. There, spokesman Eugene Donkin announced the return of Princess Nefertiti, the daughter of the Pharaoh and Queen Shabaka. The team suspected Nefertiti to be Nebet in disguise, but they later learned that her true identity was Nefertiti.

Shabaka became a suspect after Amy and the player found her draft speech to announce the murder of her husband to the public. She told the team that her husband's murder was terrible, but it did not weaken the regime. When Amy suggested that the murder was a political attack, Shabaka reminded the team to remember their place.

Mid-investigation, Shabaka ordered a palace guard to instruct the team to investigate the secret hangar where their time machine was being kept as her husband would often frequent the hangar. Later, she gave a speech at Anubis Square where she promised her people that the resistance and the Pharaoh's killer would be executed at sundown.

Shabaka was spoken to again about her vandalizing her wedding portrait. She revealed that her husband would sleep with the slaves and act like it was okay, prompting her to vandalize the portrait. She then said that she was the real mastermind behind the Pharaoh, but despite how she felt about him, she would ensure that his death was avenged.

Shabaka was found to be innocent after the team incarcerated Nefertiti for Ramses' murder. Shocked by the fact that her daughter was capable of such violence, Shabaka sentenced Nefertiti to manual labor on the island of Wolaniu. She then attempted to sentence the team and the resistance to be executed at sunset, but before she could do so, an explosion from the prison cells forced her and the palace guards to chase after the escaping resistance members. 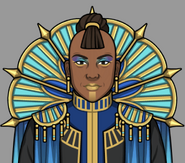 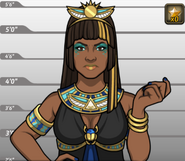 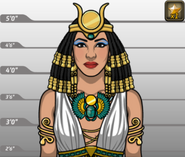 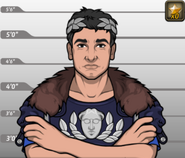 Retrieved from "https://criminalcasegame.fandom.com/wiki/Shabaka?oldid=506397"
Community content is available under CC-BY-SA unless otherwise noted.