Sergei Yablokov (Rus: Серге́й Яблоков) was a suspect in the murder investigations of former ballet dancer Odette Kamarov in Murder-Go-Round (Case #15 of Pacific Bay) and Russian community leader Nikolai Kamarov in Under the Skin (Case #17 of Pacific Bay).

Sergei is a 35-year-old Russian man with dirty, shoulder-length blond hair. He has blue eyes and a scar running from his nose to his left cheek. He is seen wearing a black jacket with the sleeves rolled up and a white shirt underneath. On his arms, he has many different tattoos. On his right forearm, he has a Quaker Star and a dagger. He has six dots on his wrist which look like numbers on a die. He has a bruise and cuts on his right knuckles, which could have been caused by fighting. He has Roman Numerals tattooed onto the top of his fingers and words on the bottom of his fingers. On his left wrist, he wears a skull tattoo and on his forearm, he has a cross and a barbed wire tattoo.

In his first appearance, he has a bruise on the right side of his forehead. It is known that Sergei eats Russian stew, uses chalk and gets manicures.

In his second appearance, his bruise has healed only to be replaced by a burn mark. It is discovered that he is right-handed and had an organ transplant.

Sergei is currently the leader of Inner City's Russian community who previously served as its second in command before Nikolai Kamarov's horrendous death.

Sergei was first spoken to by Amy and the player when they discovered his binoculars on the scene where Odette Kamarov was found weeping blood on a carousel. He stated that Odette's husband, Nikolai, had told him to watch Odette, and was angry at the fact that he had allowed Odette to die, and was worrying what Nikolai would do with him.

The team then searched for Nikolai and Odette's son Andrew when he had been allegedly kidnapped by Odette's killer. The careful investigation handed them a gun inside Andrew's toy box. After analyzing the serial number, they discovered it was Sergei's. Sergei claimed that Andrew had stolen his gun, and that Nikolai let Andrew do what he wanted as he did with Odette. Sergei also told the team that he did not believe Nikolai was a strong enough leader if he could not even control his family.

After Tammy Baker was arrested for Odette's murder, Sergei was spoken to once again when Hannah and the player found a phone belonging to Inner Chaos which contained a text message sent to Sergei. The message seemed to indicate that Inner Choas was trying to reach out to him and asking him to contact them further if he was interested. Sergei stated that the Inner Chaos thought he would see an opportunity in betraying Nikolai and him taking over the Russian mafia. However, Sergei refused to betray him as he wanted to remain loyal.

Sergei succeeded Nikolai as the Russian community leader due to Nikolai being skinned to death and tied to a parade float in the Chinese Festival.

Sergei was in trouble when Frank and the player found a Chinese sculpture (pieced back together by the player) with a message "Chinese scum, we'll have your hide" written on it during their first visit in the Chinese temple. Frank and player opted to take an initiative to talk to Sergei after finding such in which Sergei told the team they had to arrest Sue Xiong (leader of the Chinese community) for Nikolai's death, but Frank refused to do so without solid evidence. Although Sergei admitted to the team he vandalized the Chinese sculpture in retaliation to Nikolai's death, Sergei felt that his leadership would drive the Russian community to a new direction although Nikolai's atrocious direction was not the reason for the homicide according to Sergei.

When Chief Marquez ordered Frank and the player to accompany her in an attempted rescue of Sue in the Chinese temple, all the team found were clues to help them out in Nikolai's murder investigation, including but not limited to an origami with an encrypted message "Request" written on it—meaning Sergei wanted to halt the feud since it was hurting both Russian and Chinese communities financially and emotionally.

Sergei admitted he wrote the encrypted letter to Sue and even admitted the financial and emotional consequences it was causing to both communities. Unlike Nikolai, Sergei knew that there were good people in the Russian community and admitted that those good people were lost due to the Russo-Chinese feud but in turn Sergei admitted he was shot and stabbed in the liver at some point in his career, and was forced to get a liver transplant—flagging him as a suspect who had a transplant. Although Sergei wanted to end the truce peacefully by writing a letter to Sue, he believed Sue just went alone to kill Nikolai, but Sergei was fooled and dumbfounded when an organ-stealing scheme was exposed and the killer was surprisingly revealed to be Rupert Snow—a businessman who wanted to use organs of different ethnicities to bring the melting pot premise back to the district, and who also happened to be the illegitimate son of Nikolai and Sue.

After Sue brought James Toussaint to the Chinese temple for Yann's retrieval, James made fast friends with Andrew. Sergei had to take care of Andrew after Nikolai's death but when Yann found James, Sergei personally believed he would not be a good foster parent for Andrew as Sergei wanted to end the feud and to restore the togetherness of the Russian and Chinese communities first before he proceeded to take care of Andrew. After permitting Yann to take care of Andrew whenever needed, Sergei and Sue attended Nikolai's funeral—one of the first steps taken to end the Russo-Chinese feud once and for all. 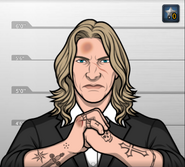 Sergei, as he appeared in Murder-Go-Round (Case #15 of Pacific Bay). 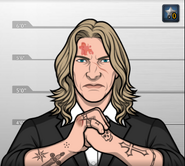 Sergei, as he appeared in Under the Skin (Case #17 of Pacific Bay). 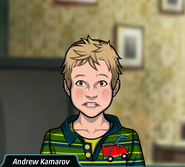 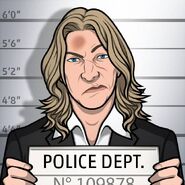 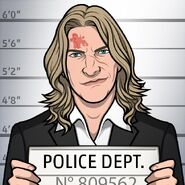 Retrieved from "https://criminalcasegame.fandom.com/wiki/Sergei_Yablokov?oldid=413804"
Community content is available under CC-BY-SA unless otherwise noted.