Sebastian Morales was a suspect in the murder investigation of President Adolfo Herrera of Luzaguay in Shadow Nation (Case #45 of World Edition).

Sebastian is the 34-year-old leader of the resistance against the Luzaguayan regime. He has wavy black hair and bushy mutton chops, wear a silver chain around his neck and has scratches on his chest. He dons a white shirt with an orange vest, and a belt strap around his shoulder where he carries a knife. It is known that Sebastian has military training, takes Gabalium, and knows the Luzaguayan Constitution.

Sebastian became a suspect after the player and Carmen found his revolution sign at the resistance's camp. At first, he drew a knife at them out of surprise, but they explained their situation. When informed of Adolfo's murder, he was happy saying SOMBRA would be brought down at last. Carmen asked how he knew of SOMBRA's ties to the government, so he explained that they were responsible for making the regime exist, though he ran away before hearing anything else. He went on to say the government is more of a dictatorship than a democracy, making them take Gabalium to keep everyone in line since the withdrawal is so bad the people would do anything to get it.

Later, the team got word that he was holding Pedro Torres hostage at the camp. Carmen managed to talk him out of hurting him, and decided to put him into custody for some time to cool off. He was spoken to again about a map where he placed several bombs around the city. He confirmed that he intended to bomb the City Hall, but when he heard of the President's murder he put the plan on hold and retrieved the bombs. But he made sure to tell them that he would be ready to fight if his power fell into the wrong hands.

In the end, Sebastian was found to be innocent after the team incarcerated Valentina Silva for Adolfo's murder. 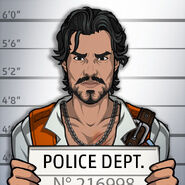 Retrieved from "https://criminalcasegame.fandom.com/wiki/Sebastian_Morales?oldid=430201"
Community content is available under CC-BY-SA unless otherwise noted.