Sean Rubio was the killer of gallery owner Valereea Valz in The Bloom of Doom (Case #10 of The Conspiracy).

Sean is the victim's 43-year-old assistant. He has short, matted brown hair, a mustache and a beard. He wears a sky blue collared shirt under a jumper with orange, beige, purple and gray stripes. Additionally, he sports black-rimmed glasses and presses a folder to his side with his left hand. It is known that Sean eats ginger, has a cat and consults the I Ching.

Sean became a suspect after Jones and the player found his business card and learned that he was the victim's assistant. He confessed that the shock of the news hadn't sunk in, and told them that the victim was planning on going to Hawtee and Sons (an art store) to complain about a delivery. This prompted Jones and the player to investigate the art store.

Sean was spoken to again about the victim's abusive behavior toward him. He defended the victim, saying that she was demanding, but the knowledge he had gained from her had been worth it. However, he admitted to considering quitting his job from time to time.

In the end, it was proven that Sean was Valereea's killer. Upon admitting to the murder, Sean said that he really wanted an art gallery of his own. Because Valereea would not take him as a partner in the project, Sean killed her to get the gallery, even defending himself with Valereea's statement that a person had to take what they wanted. Judge Powell sentenced Sean to 25 years in prison. 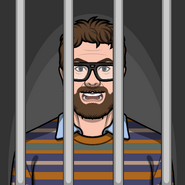 Sean, sentenced to 25 years in prison without parole for the murder of Valereea Valz. 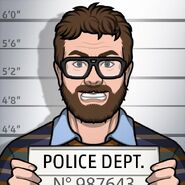 Retrieved from "https://criminalcasegame.fandom.com/wiki/Sean_Rubio?oldid=477001"
Community content is available under CC-BY-SA unless otherwise noted.