Seamus Cummings was the victim in The Parting Shot (Case #11 of World Edition).

Seamus was an arms dealer who worked for SOMBRA and supplied weapons to rebel leaders in the Sahara Region. Seamus had dark graying brown hair and green eyes. He donned a navy blue shirt and gray suit. He also wore a gold chain and had a phone in his suit pocket.

Seamus was found on Dubai's rooftop golf course with a bullet wound in his chest. According to Angela, Seamus was shot point-blank with a semi-automatic 45-caliber pistol. She found his gun holster was empty, which meant he was killed with his own gun. Angela also found he received a second-degree burn to his face while alive, and was caused by hot coffee. She believed the killer threw it in his face as a distraction before firing the gun, which meant the killer drinks coffee.

Jack and the player managed to find the victim's gun in the slums of Dubai. It was sent off to Lars for an analysis, and he managed to find traces of oud oil on the trigger. Jack had no idea what it was, so Lars explained it was a rare body oil, and expensive to boot. This meant that the killer wears oud oil.

Seamus had taken his wife, Fiona Cummings, with him to Dubai under the guise of it being a 20th anniversary vacation, but Fiona had learned not only of it being a business trip but also of Seamus cheating on her with pop star Vanna Alabama. Vanna said that their affair was more than a one-night stand, but Seamus had called her a stalker when she visited him in Dubai, breaking her heart. Meanwhile, US Ambassador to Morocco Jessica Stern came to Dubai to make a deal with Seamus after learning that he was selling weapons across the Sahara, even to people who would shoot up her son's school. Sultan Mahmoud had also paid him gold both to stop him from selling weapons to his enemies and to keep him quiet after he had caught the Sultan sneaking into a gay bar. Seamus's regular golf caddy in Dubai, Khalid Al Zahrani, meanwhile, stole money $50,000 from him so he could move his family away from Dubai.

The killer turned out to be Fiona.

Fiona initially denied the accusations but then admitted to the crime. Damien Cummings, Fiona and Seamus' son, had accidentally killed himself while playing with the gun that Seamus left unattended. Seamus then had covered the incident up by telling Fiona that the baby had been killed in a drive-by shooting. When she discovered the truth about the death, Fiona felt fooled and betrayed, and thus shot Seamus with his own gun. Judge Adaku sentenced her to 10 years in prison. 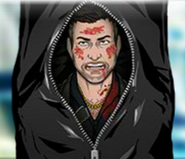 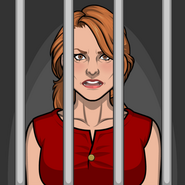 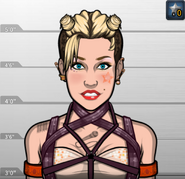 Vanna Alabama, Seamus' ex-girlfriend.
Add a photo to this gallery

Retrieved from "https://criminalcasegame.fandom.com/wiki/Seamus_Cummings?oldid=452057"
Community content is available under CC-BY-SA unless otherwise noted.