Case #50: Up in Smoke (s3)
Vice President Sarah Bennett (1964–2016) was a suspect in the murder investigation of politician Sandy Turner in Up in Smoke (Case #50 of World Edition). Later, in The Darkest Hour (Case #56 of World Edition), she executed the kidnapping of United States President James Hewett, the murders of former COSMORUS head Natasha Romanova and Bureau historian Armand Dupont before being shot to death during her arrest.

Sarah was the 52-year-old Vice President of the United States. She had blue eyes and short blonde hair. She sported pepper red lipstick and a pair of glasses. She donned a dark teal blue suit with an American flag pin over a white-collared shirt.

In her first appearance, it is known that Sarah ate quinoa.

In her second appearance, it is discovered that she had military training, took sleeping pills and drank whiskey.

Sarah was first spoken to after the player and Carmen found the victim's invitation to her, which she rejected. She was appalled that something like this could happen in America. When asked about the invitation, she said that as a government representative she could not take a side in the USStay-USNay debate. The murder was a different story, saying that assassinating people is not how to solve disputes in America. Having heard of the Bureau's work, she trusted them to find the one behind this.

Sarah was spoken to again about the victim's request for federal security, which was denied. She said she refused the request mostly because it was impossible to fulfill, and she did not want to look like she was taking any sides. The most she could do was discuss security with his campaign manager, but was unable to do anything more.

Sarah was found to be innocent after the team incarcerated Terrance Williams for Sandy's murder.

Sarah became a suspect after some FBI agents arrived and arrested Marina as a suspect in the President's kidnapping. Despite Jack pleading that Marina was innocent, Sarah felt she was too suspicious given Natasha's involvement. She believed that Russia was responsible for this, and ignored Jack when he said this was the doing of SOMBRA. She said she knew about the organization that was started called SOMBRA, but she discovered they were a made-up threat as an excuse for America to operate in foreign countries. Suddenly, Agent Riordan came in saying they found the van used to transport Natasha's body, and its GPS led to the cloisters, prompting the player and Jack to investigate there.

Sarah was spoken to again about her denying a request for extra security for the President despite warnings of an attack. She said she made the wrong call for security, and blamed herself for the fact that President Hewett was kidnapped. Jack questioned why she still would not release Marina, but Sarah said she had to atone for her mistake, and could not release her.

In the end, Sarah was revealed to be Natasha's killer and the President's kidnapper. After Sarah was able to escape arrest with the help of some FBI agents, Baxter Fraser told Jack and the player that President Hewett was being kept in the cloisters, thus revealing that he had been mind-controlled into helping Sarah and Natasha kidnap the president. With Dupont as their guide, they were able to find Sarah holding James at gunpoint. After saying that El Rey wanted to kill James personally, Sarah shot Jack. Since the bullet was only able to graze Jack's head, Sarah shot him again. However, Dupont took the bullet in the chest for Jack, who then shot Sarah in the head. Along with the player, he freed James and took Dupont to the hospital. 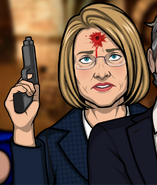 Sarah, shot in the head for the murder of Natasha Romanova, for the attempted murders of Armand Dupont and Jack Archer, and for kidnapping James Hewett. 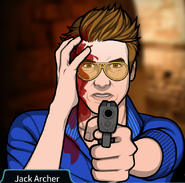 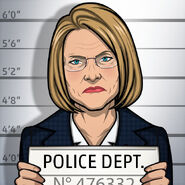 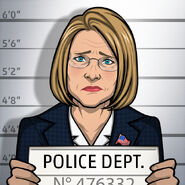 Retrieved from "https://criminalcasegame.fandom.com/wiki/Sarah_Bennett?oldid=547659"
Community content is available under CC-BY-SA unless otherwise noted.