Sandeep Sadhra (Hin: संदीप साधरा; 1967–2016) was a suspect in the murder investigations of Constable Deepak Kumar in Treacherous Waters (Case #20 of World Edition) and Bollywood actress Priya Joshi in Bloodywood (Case #22 of World Edition). He was then murdered in Insides Out (Case #24 of World Edition).

Sandeep was a 49-year-old tuk-tuk driver. He had a multi-colored vest over his shirt, and had short black hair and mustache.

In his first appearance, he wore a white shirt with the words 'I ♥ TUK-TUK' on it. He had sunglasses hanging from it. It is known that Sandeep was right-handed and had a criminal record.

In his second appearance, he ditched his sunglasses and donned a green shirt with the words 'KEEP CALM AND DRIVE TUK-TUK' on it. It is discovered that he listened to Bollywood music and played cricket.

Sandeep first became a suspect when the player and Jack found a picture of him and the victim. He immediately recognized the victim, whom he took to the museum, and offered an invitation to his cousin's wedding. When informed of his murder, he was shocked saying fate was inscrutable and the flood had already taken so many lives.

Sandeep was spoken to again after it was revealed the victim confiscated his tuk-tuk license after a speeding violation. Sandeep said he could not afford to lose his tuk-tuk as he needed it to make money. He said despite the number of infractions, he is a good driver; not to mention he begged and even tried to bribe the victim in hopes he would not take his license away, but to no avail. When suggested he killed him because of that, Sandeep replied saying he only drives fast, and does not kill.

Sandeep was found to be innocent after the team incarcerated Amrita Kumar for Deepak's murder. However, Sandeep requested the two of them help find his license at the waterfront. It was found, repaired, then returned to Sandeep who was ecstatic that he could drive tuk-tuks again, alongside elephants and tigers. He thanked the player, saying he was planning on going on a trip across India and beyond.

Sandeep became a suspect after the player and Carmen found a flyer for his tuk-tuk rides signed by the victim. When asked if he remembered giving Priya a ride, he said he remembered dropping her off at the movie set and her giving him an autograph. He was glad that a movie star like Priya decided to take his tuk-tuk instead of some big fancy limo. When informed of her murder, he said if she could not be a star on earth, then perhaps she could be a star in the sky.

Sandeep was interrogated again regarding a picture of him and the victim, where he does not look happy. He admits he was angry at the victim, but he was long over his anger towards her. He said that the victim told him to spend all night on call in his tuk-tuk while she goes to a party. However, when he dropped Priya back off at the set, she refused to pay him saying the publicity should be payment enough.

Sandeep was found to be innocent again after the team incarcerated Vikram Joshi for Priya's murder.

Sandeep was found gutted in a village square in Lhasa. According to Angela, the entry mark on his stomach suggested he was stabbed with a double-edged blade and then skinned. After that, his bones were broken in order to dismember his body. She said it was part of a Tibetan rite of sky burial, in which dead bodies were dismembered and placed on mountain tops to be eaten and carried away by vultures. Angela found a partial palm print with traces of black tea and butter on Sandeep's body, which meant the killer drank butter tea.

After a second visit to Guru Om Padmasana's sanctuary, the cops found a bloody ritual dagger. Lars analyzed the blood on the blade and confirmed a match with the victim's blood-- filing the dagger as the murder weapon. Lars also found sweat on the handle and created a partial DNA profile of the killer: they had brown eyes.

Sandeep had gotten hold of Bollywood actress Arsha Raju's 90s pop album as well as a photo of her riding a bull for a US publicity tour, both humiliating her and possibly jeopardizing her career. He had also taken a picture of Averly Worthington kissing Guru Om Padmasana, possibly causing a scandal for the guru and for his follower. Sandeep had run over Sanjay Korrapati's companion elephant, Kesavan, devastating him. Sandeep also took NGO worker Warren Goodfellow to Tibet with his tuktuk shortly before his death.

The killer turned out to be Warren.

Initially insisting he was a good man, Warren admitted to killing Sandeep to trick the Bureau into imprisoning Padmasana. He also admitted that Padmasana was not behind O.M. MediLab. After Warren refused to tell the cops the real person behind the medical firm, Chief Ripley decided to postpone his trial in order to seek the truth.

Later, it was discovered that Sandeep had stumbled upon proof of Warren working for SOMBRA. The team then found a letter from "The Head Hunter", a SOMBRA operative in China and Warren's SOMBRA contact, ordering Warren to frame the guru for Sandeep's murder to silence Sandeep and to get the Bureau off their trail. After all the evidence was gathered, Warren told Judge Adaku that SOMBRA had promised him unlimited resources and complete control before he was sentenced to life in prison. 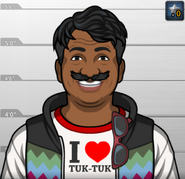 Sandeep, as he appeared in Treacherous Waters (Case #20 of World Edition). 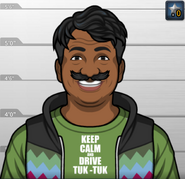 Sandeep, as he appeared in Bloodywood (Case #22 of World Edition). 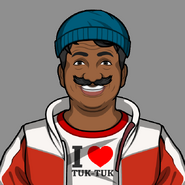 Sandeep, as he appeared in Insides Out (Case #24 of World Edition). 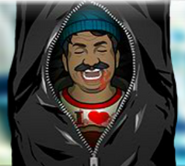 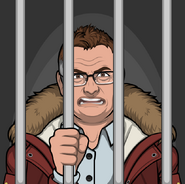 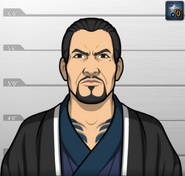 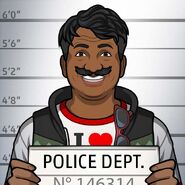 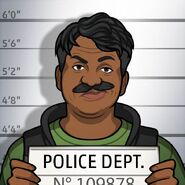 Retrieved from "https://criminalcasegame.fandom.com/wiki/Sandeep_Sadhra?oldid=491917"
Community content is available under CC-BY-SA unless otherwise noted.