Samuel was a stock trader of 28 years of age who was born in Grimsborough on January 12, 1984. He sported brown curly hair and eyes of the same color. At the time of his death, Samuel wore a black suit above a clean white shirt and a black tie.

Samuel was found hung up in the Stock Exchange, cut open in the stomach and emptied of his insides. He was killed by a samurai sword. Nathan found in his autopsy report that Samuel was out partying before he was killed and was found with a high level of alcohol and barbiturates in his body. When he was hung up, he tried to break free and broke both of his arms doing so. The killer was discovered to use dental floss as there were traces of it on Samuel's wrists. It was also discovered that he could only have been cut with a small sharp object.

The night before the murder, he and fellow stock trader Jack Ryan made a reservation in the Greene Casino managed by Brooke Chase, who had apparently gotten angry at Samuel for acting drunk and animalistic. Jack reported not having a single memory of the night, however, after mixing barbiturates with his drink. The team would later find out that Samuel was covering up for Jack as he had lost a few million dollars in one night.

Meanwhile, Kate Murphy, one of the casino employees, was hurt at Samuel ignoring her existence as she was his girlfriend before all he began caring about was money. As a barbiturate seller, Kate would presumably be the one selling the drugs to Jack and Samuel.

Another stock trader, Harry Krane, had apparently been to the same party the night before and even made a bet with Samuel. Harry said that he did not feel sad for Samuel as he was competition. This competition materialized in the form of Alden Greene choosing among Samuel over Harry and Jack to hire to manage his money.

The killer turned out to be Harry.

Alden needed a new stock trader, so he wanted to hire Samuel. Harry did not like it when Samuel kept on bragging about his deal with Alden and as a result, he got jealous and killed Samuel with a samurai sword, and hung the victim up in the Stock Exchange. Judge Hall sentenced him to life in jail with no chance for parole. 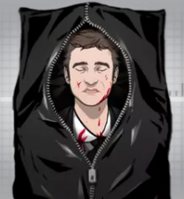 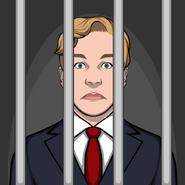 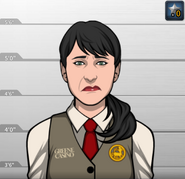 Kate Murphy, Samuel's ex-girlfriend.
Add a photo to this gallery

Retrieved from "https://criminalcasegame.fandom.com/wiki/Samuel_Rye?oldid=491866"
Community content is available under CC-BY-SA unless otherwise noted.