Samson is a 38-year-old education lobbyist. He wears an olive green bowler hat with a black stripe and has a black mustache. He also wears a black suit jacket over a gray pinstriped waistcoat with black buttons and a golden pocket watch and a white shirt with a forest green tie.

In his first appearance, it is known that Samson has diabetes, reads Machiavelli and eats lobster.

In his second appearance, he is seen sporting a pair of white gloves. It is discovered that he is physically fit, drinks coffee, has been to Switzerland and hunts.

Samson became a suspect after Maddie and the player found a photo of him in the victim's bag. He explained that he had met her professionally and had handed her a promotional photo of himself. After realizing that they were talking about her in the past tense, he asked if something had happened to her, to which Maddie revealed that she had been murdered at the Senator's awards luncheon. He revealed that he had to leave the luncheon early to attend another appointment and said that the victim was a refreshingly sincere person.

Samson was found to be innocent after the team incarcerated Gertrude Avery for Lissa's murder.

Samson became a suspect again after Maddie and the player found a hunting horn he had gifted to the victim. When informed of the murder, he said that he had known the victim through his father and that he had met the victim multiple times at meeting with the Senator, showing an interest in Archie for the sake of politeness, leading him to invite him to a hunting trip. However, the victim wasn't into hunting.

Samson was spoken to again about his animal tranquilizer on the victim's graduate cap. He revealed that the victim had discovered that he had never obtained a law degree and had humiliated him in front of his father. The victim had then given him his own graduate cap, saying it was his only chance to wear once. When Maddie suggested that he may have killed him out of revenge, he rejected their accusations.

In the end, it was proven that Samson was Archie's killer. Upon admitting to the murder, Samson claimed the murder was a message to his father. He said that Malcolm promised him that he would be the education minister of the New Concordia Republic, but he found out that the Republic would only have schools for the rich to make the masses easier to govern. Realizing what his ambitions made him do, he realized he needed to send a message to the Senator. He then put Swiss chloroform in Archie's inhaler, subduing him enough to saw him in half with a handsaw. He then carried the body to the courthouse, displaying his body on the scales to tell Malcolm his just punishment for his plans for the Republic would befall him. Judge Takakura sentenced him to life in prison. 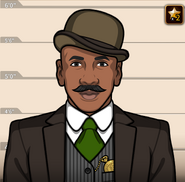 Samson, as he appeared in The Machiavellian Candidate (Case #49 of Mysteries of the Past). 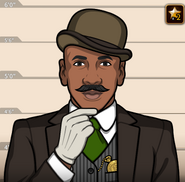 Samson, as he appeared in Tipping the Scales (Case #51 of Mysteries of the Past). 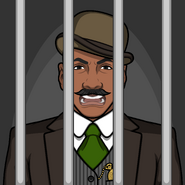 Samson, sentenced to life in prison for the murder of Archie Rochester and for defacing a symbol of Justice. 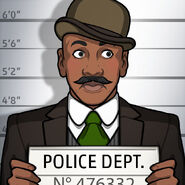 Retrieved from "https://criminalcasegame.fandom.com/wiki/Samson_Drake?oldid=415441"
Community content is available under CC-BY-SA unless otherwise noted.