Bullet wound to the brain

Sam De Witt was the victim in Deadeye (Case #39 of The Conspiracy).

Sam was the captain of the Iota Psi Omega paintball team and a student at Grimsborough University. She had long brown hair, dark brown eyes, and a beauty spot above her right cheekbone. At the time of her death, she wore a blue Iota Psi Omega V-neck shirt under a gray tracksuit jacket stained with purple and yellow paint, blue denim jeans, and black shoes. She also wore a silver necklace with a blue jewel and was seen wearing kneepads. Furthermore, she sported protective goggles and held a blue paintball gun in her left hand.

Sam's body was found at the university's paintball arena with a projectile wound to her left eye. Martine ascertained that Sam had been shot in the eye with a marble fired from a paintball gun at high pressure as she had found the marble embedded in Sam's temporal lobe. Due to the unusual conditions, the killer must have had great aim to hit Sam, allowing Martine to conclude that the killer was a sharpshooter.

Later, Gloria and the player found a paintball gun that had been hidden under a pile of rocks. Rita confirmed that the gun was the murder weapon due to the scratches inside the barrel that had been made by a glass marble. Rita informed the pair that Amir had found a mixture of cheap beer and Rocket Cow on the gun, which were ingredients in a cocktail called "Blast-Off Brew". This allowed them to conclude that the killer drank Blast-Off Brew.

Sorority chapter president Monica Pozie accused Sam of multiple accounts of theft, including stealing her paintball equipment. Sam was assigned to be the big sister to Ashley Howard, but freaked out at her after finding out she was a transgender woman. Sam was in a relationship with Blaise Studebaker before she broke up with him upon finding out he had planted a camera in the girls' changing room. Sam had a professional rivalry with opposing team captain, Courtney Guerra, although Courtney accused her of cheating at a determining match that allowed Sam's team to progress into the finals. Captain Clementine trained the girls during their paintball matches, even advising Sam to drop her shield during her final match.

The killer turned out to be Monica.

Upon admitting to the murder, Monica said that despite her efforts to attain the sorority presidency, her sorority sisters never approached her for personal counselling, opting to talk to Sam instead. This made Monica think Sam was stealing Iota Psi from her, especially with the sorority president elections coming up. Not wanting to lose the presidency, Monica tampered with the air tank for her paintball gun to increase its pressure and fired a marble straight into Sam's eye. Judge Powell sentenced her to 15 years in prison. 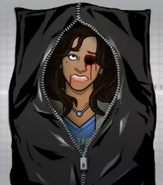 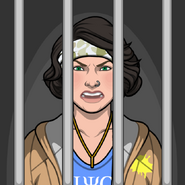 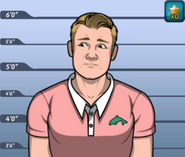 Blaise Studebaker, Sam's ex-boyfriend.
Add a photo to this gallery

Retrieved from "https://criminalcasegame.fandom.com/wiki/Sam_De_Witt?oldid=495615"
Community content is available under CC-BY-SA unless otherwise noted.