Multiple bullet wounds to the chest

Sam Chey was the victim in No Mercy for Old Men (Case #20 of The Conspiracy).

Sam was an old man residing at the Shady Hollow elderly shelter. He had gray hair, black eyes, and notable wrinkles on his face. At the time of his death, he wore a gray suit with a white collared shirt, a forest green and ocean blue plaid vest, and a matching bow tie. It is known that Sam played bingo.

Sam was found shot seven times in the chest on a bench in Landmark Park. Upon autopsy, Martine discovered that his denture was missing and, with Rita's input, that the bullets came from a small 9mm pistol. Furthermore, she found traces of whiskey, honey, and cinnamon—the ingredients for a hot toddy—on Sam's face and hair. This led her to the conclusion that the killer, who was having a hot toddy at the time of the murder, threw their drink in the victim's face before shooting, which meant that the killer drank hot toddies.

A pistol matching the description given by Martine was then found inside a wheelbarrow of debris at the crime scene, and was subsequently registered as the murder weapon upon confirmation from ballistics. Meanwhile, Amir found some residue of a cream containing peptides and caffeine—a popular combination for eye creams—on the gun's grip and trigger. However, given that this particular cream also included other ingredients that would completely counteract the intended benefits and therefore render it useless, Amir deduced that the killer would have bags under their eyes.

Sam had a daughter, Dara Chey, who was angry at her father after he had cut her out of his last will and given the money to a religious cult. It was also discovered that Shady Hollow head nurse Edith Bradley had believed the victim was sad at having to stay at the rest home and that he knew his time was coming, hence the painting Edith painted. Jack Cannity was also convinced that Sam had cheated at bingo by hiding fraudulent bingo cards in the extra pockets within his suit that was tailored by tailor Basil Cavendish, who disagreed with the victim’s choice of fabrics for his suits, which angered Sam. It was also discovered that Margaret Littlewood had been dating the victim for a summer before he spurned her.

The killer turned out to be Basil.

Upon admitting to the murder, Basil said that when his father passed down the tailor business to him, profits began plummeting, only compounded by the fact that Sam was badmouthing the business as well as not paying for his suits. To prevent his business from failing any further, Basil shot Sam, eventually shooting him seven times as he unraveled. Judge Powell sentenced him to 20 years in prison. 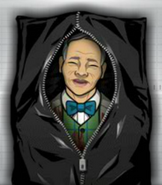 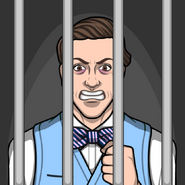 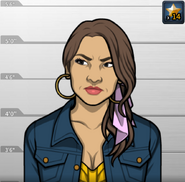 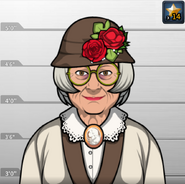 Margaret Littlewood, Sam's ex-girlfriend.
Add a photo to this gallery

Retrieved from "https://criminalcasegame.fandom.com/wiki/Sam_Chey?oldid=469553"
Community content is available under CC-BY-SA unless otherwise noted.