Sally Stone was a suspect in the murder investigation of her boyfriend, junkie Dan Broke, in The Dockyard Killer (Case #4 of Grimsborough).

Sally is the 19-year-old girlfriend of the victim with short red hair and green eyes. She is seen wearing a navy t-shirt with a blue skull drawing on it. Additionally, she wears a gray hoodie with a skull badge on the right side of it. She also sports a cross earring on her right ear. It is known that Sally is left-handed.

Sally was interrogated again after the team found Dan's blood on her shoes. Sally finally confessed about knowing Dan and said that she had lost her way while looking for Dan before tumbling upon Dan's corpse. which freaked her out and she ran away.

Sally was found innocent after the player found enough evidence to find Bulldog guilty for the murder.

Later, the team checked up on Sally, and she told them that she had lost her antidepressant pills. The team looked for them and made sure they were safe. They brought them back to her and she said she would go back home with her parents in Maple Heights. 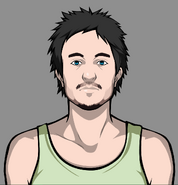 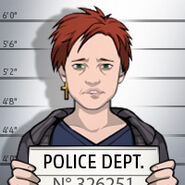 Retrieved from "https://criminalcasegame.fandom.com/wiki/Sally_Stone?oldid=471364"
Community content is available under CC-BY-SA unless otherwise noted.