SILVERee is an 18-year-old K-pop idol. He wears makeup and has partially cut cyan hair. He is seen wearing a violet marching band outfit with a red neckerchief and gold piercings on his left ear.

In his first appearance, it is known that SILVERee practices calligraphy, eats gong bao chicken and has a cold.

In his second appearance, it is discovered that he plays hwatu, eats kimchi and sings karaoke.

In his third appearance, he wears a gray jacket with a SOMBRA armband, a black sash and a black neckerchief. He has black face paint and dons cyan nail polish on his hands. It is revealed that he is skilled with a crossbow and speaks Japanese.

SILVERee became a suspect after it was shown that the victim was recording him at the panda reserve. When informed about the murder, he just shrugged off the victim recording him as coincidence, believing her to be a fan. He pointed out he was at Sichuan to film a new music video and offered Jack a part in it (which Jack declined), prompting him and the player to leave him for then.

SILVERee was interrogated again after it was revealed that the victim was trying to ban his music on Chinese children's networks. He said the victim claimed he was a bad artist and a terrible role model, which SILVERee furiously disagreed with. He claimed he was serious about his work and was dedicated to it, and said the victim crossed the line. Later, Jack and the player had to save him from a panda attack back at the reserve.

SILVERee was found to be innocent after the team incarcerated Ellen Morowitz for Jun's murder. However, he was spoken to again by the player and Angela regarding the location of her daughter April Douglas. He was glad they showed up, as he was happy to return April to them. He said he found April walking around alone, and decided to look after her until someone came to take her back.

SILVERee was suspected of murder once more after Carmen and the player found a poster for his appearance on the show produced at the crime scene. He confirmed the victim's identity as Gwak Sung-ho, a Korean television producer. He displayed surprise at hearing it that Sung-ho was murdered, believing the death was just an accident. Carmen asked if he knew the victim, which he confirmed saying the victim wanted him to promote his new single on his show. He said the victim was a high-strung type of person and very difficult, saying he only saw him smile when he was at the park outside the studio where he went all time; prompting the player and Carmen to investigate the park for more clues.

SILVERee was interrogated again about him lip-syncing his song on the victim's show, as it was shown that the victim nearly embarrassed him by stopping the song. He explained that life on the road was not easy, and that if he felt he could not do his best he would engage in lip-synching. SILVERee told that he expects producers to be professional and not play silly games, much like the stunt Gwak pulled. He was so furious at the victim for what he did that he threw his kimchi at him.

SILVERee was found to be innocent a second time after the team incarcerated Kang Dong-yun for Gwak's murder. However, Elliot reported that SILVERee would be at the karaoke bar signing autographs, and around that time only his music would be played for children. Seeing it as suspicious, Jack and the player decided to investigate, but to avoid any suspicion they went disguised as K-pop stars. When spoken to, SILVERee just told them to watch his videos on one of the laptops. They found one in the karaoke booth, then sent it off to Elliot for analysis. When he went through the video frame by frame, he found a SOMBRA logo and messages about not being weak and doing one's duty, which was a phrase said by Indian street kid Sanjay Korrapati back in Beijing. This meant SOMBRA was using subliminal messages in order to brainwash children. Suspecting SILVERee must have known, Jack and the player went back to speak to him still under the guise of a Korean singer. However when SOMBRA was mentioned, SILVERee said he did not know who or what that was, thinking it was a potential rival. Jack informed him of what SOMBRA was doing to his videos as he removed his disguise. Even with the revelation, SILVERee pleaded that he did not know what SOMBRA was, but intended to look into it as he prefers not to have anyone using his videos without compensating him.

SILVERee became a suspect again after Carmen and the player found a poster of him advertising a hunt for SOMBRA. When informed of the murder, he was mildly shocked, but then said it had nothing to do with him. When asked about the SOMBRA armband he was wearing, he said he did not need to know anything about his sponsors.

SILVERee was interrogated again about his stage glitter found on a shuriken. Carmen was convinced he was a part of SOMBRA's hunt, to which he responded saying it was all for show. However, Carmen pointed out that everything happening in the Hunt was real and kids were dying. Now realizing it, SILVERee became frightened beyond belief, and Carmen said he would remain in custody until the case was over.

SILVERee was ultimately found innocent after the team incarcerated Obaasan for Hiroshi's murder and for organizing the child-brainwashing scheme and hunt. However, he suddenly showed up hoping to make it right by helping the player fix Obaasan's actions by finding the children's keepsakes, which would undo the effects of the brainwashing. He ended up helping find keepsakes for Sanjay and Tsukada Chieko respectively, which prompted his release. 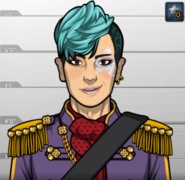 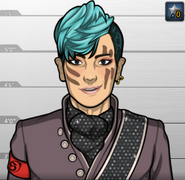 SILVERee, as he appeared in The Murder Games (Case #30 of World Edition). 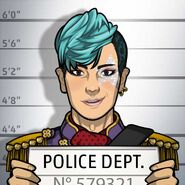 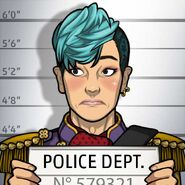 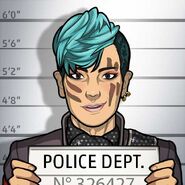 SILVERee featuring in a "Caption the Scene" promo.
Add a photo to this gallery

Retrieved from "https://criminalcasegame.fandom.com/wiki/SILVERee?oldid=531232"
Community content is available under CC-BY-SA unless otherwise noted.