Ruthie Samson was the killer of tourist writer Paula Mahler in Into the Woods (Case #27 of Pacific Bay).

Ruthie is the director of the White Peaks tourism office. At 62 years of age, she has blue eyes and sports long and messy gray hair. She dons a white shirt and a red jacket over it. On the right side, she wears a mountain badge and a pine tree badge. On the other side, she sports an ID card that reads "DIRECTOR OF TOURISM". For makeup, she wears blue eyeshadow, fake eyelashes, and black eye lining as well as pink lipstick. Besides that, she wears a red beaded necklace and sustains a bruise on the right side of her forehead. It is known that Ruthie knows knot making, has contact with wood mushrooms and wears hiking boots.

Ruthie, a then-director of tourism in Logan's Pass, found herself in trouble after authorities found a business card in the timber mill. Ruthie was kind enough to identify the victim as Paula Mahler, claiming that she knew Paula did not make it to an intended rendezvous. Ruthie took some time to describe Paula to the team of Frank and the player—Paula was a travel guide who was the author of the "Pretty Planet" tour guidebook. Part of Paula's job was to camp in the wilderness of Logan's Pass according to Ruthie, so Frank and the player (in spite of Ruthie's plea to keep the investigation discreet) headed to Paula's campsite in Logan's Pass to carry on with the investigation.

Ruthie told Frank and the player at the moment of her arrest that Paula and herself were friends, but when Frank countered that she matched the description of Paula's killer, she admitted to the murder. Ruthie was disappointed in Paula's lackluster coverage of Logan's Pass in the "Pretty Planet" tour guidebook and insisted on Paula's unconditional help to make Logan's Pass the next Aspen. Paula opted to remove Logan's Pass from her guidebook, which went against Ruthie's orders all the way through.

Ruthie felt that Paula's insubordination was more than she could take, so she had to resort to bloodlust to punish Paula for such. Ruthie suckered her into the timber mill by pretending to be Judd Tucker, the lumberjack who had saved Paula's life not-so-long ago. Ruthie cornered Paula albeit the victim climbed onto the saw table to get away from her. Paula lost traction, allowing Ruthie to tie her into submission, igniting the arbor saw, and slicing her like butter. Frank heard enough so the player shipped Ruthie to court. 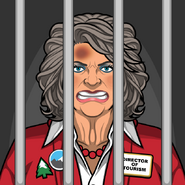 Ruthie, sentenced to 25 years of jail without parole for the murder of tourism writer Paula Mahler. 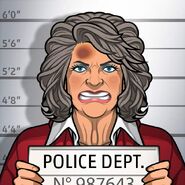 Retrieved from "https://criminalcasegame.fandom.com/wiki/Ruthie_Samson?oldid=488120"
Community content is available under CC-BY-SA unless otherwise noted.