Ruth is a 37-year-old waitress of the Black Sparrow pirate bar with brown shoulder-length hair braided and preserved with shells and black eyes. She is seen wearing a white pirate crop top with lace linings and a dark brown buccaneer hat with a light brown band, a golden buckle and a blue feather. She is also seen wearing a brown Jolly Roger necklace and white name tag with a red border and her name written in red letters.

Ruth became a suspect after Jones and the player found her photo with the victim. When being asked about Joshua, Ruth expressed her grieve to him. She also revealed that Joshua was a colorful character as well as a great tipper.

Ruth was spoken to again after the team found out that the victim reported her for not having a visa for 2 months as well as working illegally. The team then asked her about the form. Ruth told the team that she was a legal immigrant, and Joshua was wrong as she was just waiting for the approval hearing for her permanent visa, but the victim did not listen to anything she said. Ruth also swore that she did not kill Joshua, she just wanted the victim to leave her alone.

Ruth was found to be innocent after the team incarcerated Carl Rossa for Joshua's murder.

After arresting Ryan Min's killer, Rita and the player approached Ruth after finding traces of a rum served by The Black Sparrow on the gavel of Judge Powell, who had gone missing after Felix's trial. Ruth then told the team that the judge had never gone in the bar, however, she had overheard two men mentioning the power plant while talking about wanting to give Judge Powell a lesson. After figuring out that she was kidnapped, the team left the bar, but not before Ruth gave them excess food that they had to cook due to the blackout. 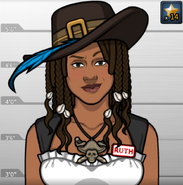 Ruth, as she appeared in Dead Men Tell No Tales (Case #28 of The Conspiracy). 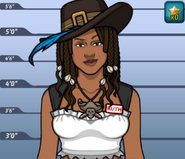 Ruth, as she appeared in Lights Out (Case #50 of The Conspiracy). 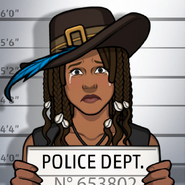 Retrieved from "https://criminalcasegame.fandom.com/wiki/Ruth_Matuszak?oldid=495959"
Community content is available under CC-BY-SA unless otherwise noted.