Ruth was a 35-year-old genetic scientist in Innovation Valley working on cloning. Ruth had black hair and black eyes wore a pair of glasses. At the time of her death, Ruth was seen donning a lab coat over a pink blouse and was seen holding a stethoscope.

Ruth was found at a juice bar with her body parts sticking out of blenders. When sent to Roxie, she found that the victim was cut into pieces by some kind of saw. Then the killer proceeded to put parts of her body into a blender, along with several fruits. Roxie stated the killer chose specific fruits which would attack the body, making it easier for it to turn into pulp. She informed the player and Amy that whoever killed her knew how to make smoothies.

After a second examination of the juice bar, they managed to find a saw covered in blood. They sent a sample to Yann, and he confirmed that most of it was the victim's, meaning the saw was the murder weapon. He also found another person's blood sample on it, considering how messy the murder was, he was not surprised that the killer cut themselves. He managed to confirm the killer's blood type was O+.

Ruth was being sponsored by the People's Republic of North Freonia through Ambassador Lee to make an army of clones. However, Lee was being pressured to speed Ruth's research up as the country's leader found it too slow. Ruth's first creation being Milo, who turned out grotesque, much to his anger and sorrow. Ruth kept him under wraps so as not to scare people but she still kept him alive, growing new organs for him when he got sick. When she perfected the technique, Ruth was able to make a perfect clone of herself. Clone Ruth felt that her original did not care about her, however, and "stole" Ruth's life by taking her place in some aspects of her life, like sleeping with her husband, Nigel, who the original Ruth was trying to have a baby with. Sister Dolly was furious at Ruth for playing god with her experiments, and was even more furious when Ruth offered to recreate her deceased brother.

The killer turned out to be Nigel.

Nigel was a house husband and eventually wanted children, but he was fed up with Ruth's workaholic lifestyle not allowing him to spend time with his wife. Nigel thought Clone Ruth was more loyal than the real Ruth, so he sliced the real Ruth with a saw, and then shredded her using the blenders available in the juice bar. Amy had enough, so she allowed the player to ship Nigel to face Judge Dante, where he sentenced him to 30 years in prison. 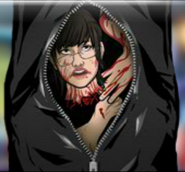 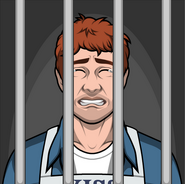 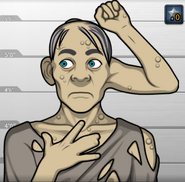 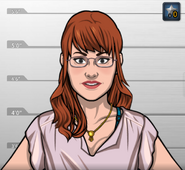 Ruth, Ruth's genetic clone.
Add a photo to this gallery

Retrieved from "https://criminalcasegame.fandom.com/wiki/Ruth_Campbell?oldid=491936"
Community content is available under CC-BY-SA unless otherwise noted.