Ruth was a suspect in the murder investigation of her creator, scientist Ruth Campbell, in Blood in the Blender (Case #48 of Pacific Bay).

Ruth is a clone that was genetically created by Ruth Campbell. Though her age is listed as 35, it is most likely because she is an exact clone of Dr. Campbell, minus the red hair so her actual age is unknown. Ruth usually wears a pink blouse, a golden pendant, and a pair of glasses over her brown eyes. It is known that Ruth makes smoothies, takes hormones and is a Christian.

Ruth came to the team after hearing of the real Ruth Campbell's death. She said that she was not the victim exactly, so that prompted the player and Amy to question her. She explained that she was a clone, and that the victim used her own DNA to create her. Ruth became scared that the killer may come after her if they found out that she exists since they killed the real Ruth Campbell. Amy and the player allowed the clone to stay at the station until the investigation was over.

Amy and the player spoke with the clone again after discovering a picture of her and the victim. They revealed a message saying "If you keep wasting your life, I'll take it!", and they suspected the clone wrote it. Ruth admitted to writing the message, saying the victim did not care about her. She said it was hard being born a grown woman, so she wrote that message and took her place on occasions. Ruth Campbell's husband, Nigel Campbell, was not even aware that she was a clone. This prompted Amy and the player to speak with Nigel again.

Ruth was found innocent after the team indicted Nigel for murder, but the team was not through with clone Ruth yet. She decided to continue the victim's research so the team went to speak with her to confirm it. Being a clone of the victim, she has all her scientific ideas, so Ruth thought to continue the research. The team searched the lab and managed to find DNA research, which Hannah managed to discover it can break DNA down into binary code. Amy was shocked to hear that Ruth managed to find a way to reprogram humans like robots. Hannah went on to say this research can be able to merge humans with robot technology, being able to create cyborgs. They believed this kind of research would be dangerous if it fell into the wrong hands, so they went to Ruth in hopes of stopping it. When asked to stop the research, Ruth admitted she got bored of science and decided to move to Ivywood to become an actress instead. 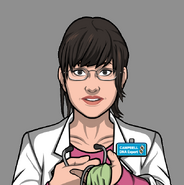 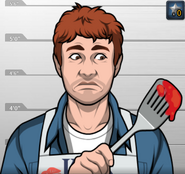 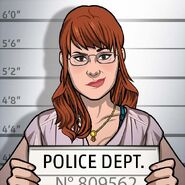 Retrieved from "https://criminalcasegame.fandom.com/wiki/Ruth?oldid=507736"
Community content is available under CC-BY-SA unless otherwise noted.