Running Scared is a case featured in Criminal Case as the fifty-fifth case of The Conspiracy (Season 5) and the two-hundred eighty-sixth case overall. It is the first one to take place in the Newmark district of Grimsborough.

The team headed to Newmark to rescue Gloria's ex-husband and son, Jake and Carter Hayes. Soon after Cathy reported shots getting fired at a construction site in Newmark, the player went there accompanied by Jones, who was taken out of indefinite leave after Zoe's murder. In a tube room there, however, they found Jake, shot dead with his hands tied, and Carter missing.

During the investigation, the team learned that Ad Astra had left Jake and Carter to an accomplice before the murder. Shortly after, Cathy told the team she had tracked the (now-abandoned) van which the killer used to take Carter away from the construction site. Later, the team arrested construction site owner Clive Bloom for aiding and abetting in the kidnapping as he had given Rozetta Pierre free reign over the tube room. The team then calmed Gloria down after she hysterically tried to take over the investigation. Finally, the team found enough evidence to arrest Mayor Joe Warren's assistant, Mandy Pregodich, for the murder.

Upon admitting to the murder, Mandy said that Mayor Warren had asked her to keep watch over Jake and Carter, telling her that Jake was a political enemy. Wanting to remain close to the city's most powerful man, she agreed. However, Jake had woken up and tried to escape, leading to a fight that culminated in Mandy shooting him dead and taking Carter away.

After Judge Powell sentenced her to life in prison, she agreed to give away Carter's location in exchange for a lighter sentence. In prison, Mandy told the team that she left Carter in an abandoned garage near the hike and bike trail. The team then rescued Carter and reunited him with Gloria, after which he told them that Mandy was accompanied by a man who helped her with the kidnapping.

Jones and the player searched the van for clues about Mandy's accomplice. There, they found the accomplice's face mask with hairs which (per Amir) belonged to Troy Cassidy. Upon the arrest, Troy told the team that Christian Bateman had looked him up and convinced him to join the operation in exchange for financial backing of his struggling microbrewery. The team then told Carter that they had caught his other captor and later found and returned the last toy that his father had given him.

Meanwhile, in exchange for release from prison, Clive told Chief Parker and the player that he had overheard Rozetta saying things that implied her mom was the "puppeteer". He also said that more strangers were hanging around the construction site after Rozetta's call and so the team went to the site, where they found a money envelope with fingerprints which (per Cathy) belonged to homeless vet Danny Williams. Danny said that a woman had paid him to look out for three people fitting the descriptions of Rozetta, Bateman, and Warren. With Danny's physical description of the woman, the team concluded that it was Denise Daniels who had paid Danny.

After all the events, the team decided to go to S.A.R.A. to confront Denise about her surveillance of Ad Astra.

James Savage
Add a photo to this gallery

Carter Hayes
Add a photo to this gallery 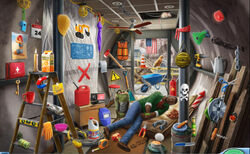 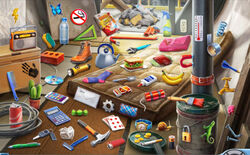 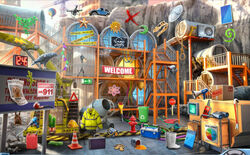 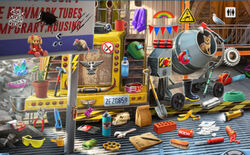 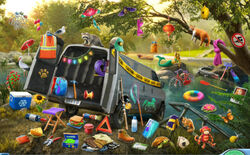 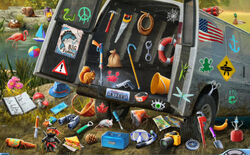 Van Interior
Add a photo to this gallery

Retrieved from "https://criminalcasegame.fandom.com/wiki/Running_Scared?oldid=526091"
Community content is available under CC-BY-SA unless otherwise noted.