Ruby Armstrong was a suspect in the murder investigations of three people in World Edition, family doctor Greg Gibbs in Flatline (Case #7 of The Conspiracy), and artist Meera Kat in The Art of Murder (Case #12 of The Conspiracy).

Ruby is a 35-year-old volcanologist from Australia. She has long red hair, a red jewel necklace, and identical flower tattoos on both of her arms.

In her first appearance, she dons an algae green shirt with a cartoon volcano and the words "LAVA'S IN THE AIR" on it. It is known that Ruby eats durian fruit.

In her second appearance, it is discovered that she is allergic to seafood.

In her third appearance, she is bruised on her forehead, cheek, and neck. It is revealed that she uses sunscreen.

In her fourth appearance, she puts her hair up in a ponytail and now wears a beige, sleeveless vest with a cartoon volcano pin over a blue-and-white shirt with the words "Make Lava not war". Furthermore, she is bruised on her forehead, cheek, and neck. It is noted that she uses FilterPix.

In her fifth appearance, her bruises are now healed. It is learned that she eats chili pepper, takes antidepressants and owns a crocodile skin wallet.

A Stab in the Dark

Ruby became a suspect after Carmen and the player found a locket of the victim, Constance Tan, with her fingerprints on it. She was utterly shocked at hearing about Constance's death, saying the two of them were best friends. She ended up losing her locket, and felt something bad would happen because of it. Ruby said she met the victim at the university, Constance studied finance while Ruby studied volcanology.

Ruby was interrogated again regarding a photo of her kissing the victim. She admitted that they dated a few years back, but kept it secret. However, Constance ended up dumping her, preferring Anbu Devanesan, someone with more money and more business-like. She felt that since she was a girl, Constance wanted to keep it a secret, but eventually got tired of her and her secrets.

Ruby was later found to be innocent after the team incarcerated Anbu Devanesan for Constance's murder.

Ruby became a suspect again after the player and Carmen found her rock sample on the primary crime scene. When Carmen brought up Jackson Peters's murder, Ruby was surprised to hear of it, before going on to state that, after leaving Singapore, she felt she needed to do something else to fix her broken heart. And when she saw that the victim was looking for consultants with a scientific background for his movie, she jumped at the chance. But after hearing of Jackson's murder, she felt that she was now out of a job.

Ruby was spoken to again about a photo of the victim kissing her. She said it was taken back when she signed her location consulting contract. However, she found out the locations were already chosen; Jackson hired her so he could make his wife jealous. Since the victim's wife never mentioned her, she got a call from the victim saying her work was useless.

Ruby was later found to be innocent again after the team incarcerated Jermaine Waaka for Jackson's murder.

Ruby was interrogated as a suspect again after the player and Jack rescued her from SOMBRA's volcano lab. She thanked the player for saving her and mentioned that she ended up there because her equipment picked up some unexpected seismic activity. She thought it was strange since there was no known volcano, but ended up finding the volcano and the lab within it thinking that it was amazing. Suddenly, the victim, Marshall Metcalf, appeared and tied her up, saying she knew too much to leave the island alive. When informed of her attacker's death, she said she felt at least a little safer.

Ruby was spoken to again about her plans for the creation of SOMBRA's volcano lab. She said she was proud of her work, since no one else managed to design this before. When Jack asked if she knew who the lab was being made for, Ruby said she was not working for them and that she never even had a chance to see the lab she made once it was complete. Ruby wanted to see her plans come to life, even with the victim threatening her.

In the end, Ruby was found to be innocent after the team incarcerated Brice LeBeau for Marshall's murder. Ruby later announced to the team that the seismic shocks implied that the volcanic eruption and the island sinking would happen in two hours. After Jack and the player did the proper investigating, the team left the island and Ruby told them to watch it sink.

Ruby was surprisingly brought into another murder investigation after she was found rescued by a crisis worker at Walton Square. She said that she came to Grimsborough to study the earthquake and found lava flowing in the streets. As she was trying to find a way underground, an aftershock hit and nearly left her in a pile of debris. When told about Dr Gibbs's death, she said he was probably helping with relief efforts at the crisis center, prompting the team to search there.

Later, the team found her defaced article on Dr Gibbs, calling him a liar. She said that she called him a liar because she met Greg (who was pretending to be a geologist) months ago on an online discussion forum. When the earthquake struck, Greg urged for her to come to Grimsborough, even offering to pay for the trip and access to the lava flows. But when she arrived she realized that Greg was a family doctor who was trolling her, just so that he could sleep with her, not accepting the fact that she was a lesbian.

Ruby was ultimately found to be innocent after the team incarcerated Richard Harding for the doctor's murder. However, she approached the team to tell them that according to her seismic readings, another aftershock would make the Financial Center collapse into a pool of lava. She then said there was a chance they could stabilize the area. The team promptly went to Walton Square and found Ruby's scanner, which (per Ruby and Cathy) indicated that the footings of the Financial Center's buildings could be reinforced to protect against further damage, prompting the team to talk to architect Roman Harris.

Ruby became a suspect for a fifth time after Gloria and the player found her lava machine at the scene of Meera's murder. When told about the murder, she said that it was only a matter of time until someone got hurt, and that her warnings to Meera had gone unheard.

Ruby was spoken to again about the fact that she had been photographed by the victim when she was trapped under the rubble due to an aftershock of the earthquake. Ruby admitted to tracking down the victim to confront her, but was shocked when she learned that she didn't care. She then branded Meera as the most horrible life form to walk the Earth since it's crust first solidified.

Ruby was found to be innocent for a fifth time after the team incarcerated Christian Bateman for Meera's murder. 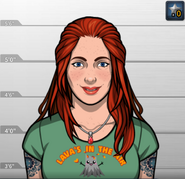 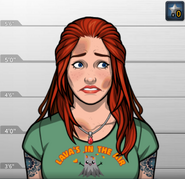 Ruby, as she appeared in Out of the Blue (Case #36 of World Edition). 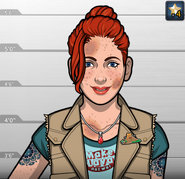 Ruby, as she appeared in Flatline (Case #7 of The Conspiracy). 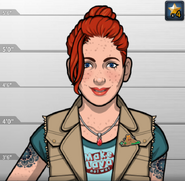 Ruby, as she appeared in The Art of Murder (Case #12 of The Conspiracy). 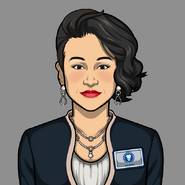 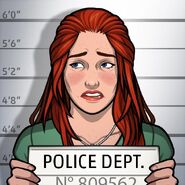 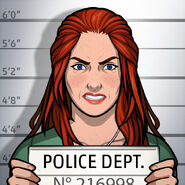 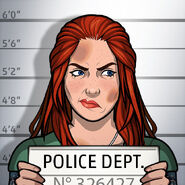 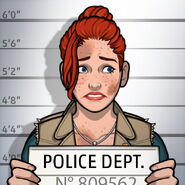 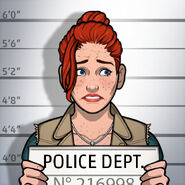 Retrieved from "https://criminalcasegame.fandom.com/wiki/Ruby_Armstrong?oldid=483011"
Community content is available under CC-BY-SA unless otherwise noted.