Rozalina Davidov (Rus: Розалина Давыдов) was a suspect in the murder investigation of model Emma Ternon in The Kiss of Death (Case #16 of Grimsborough).

Rozalina is the 38-year-old head of Glamm Modeling. She has blonde hair tied back and a bindi between her light blue eyes. She wears pink lipstick, and a necklace with two gold beads in the middle and a small jewel at the bottom. She wears a red dress that forms a heart shape around her cleavage. It is known that Rozalina eats sushi and uses lip balm.

Rozalina was called in by Jones and the player when they saw the logo of her modelling agency on the victim's tablet computer. During the investigation, the team found a broken hard drive on Rachel Priest's desk. After piecing it back together, the hard drive was given to Alex for analysis. After analyzing it, Alex told the team that Emma did not want to be Rozalina's call girl anymore, but Rozalina had pretty much kept Emma as a prisoner. Emma realized that the only way to be free was by exposing Rozalina and the company's illegal actions to Rachel, as she was a news reporter. 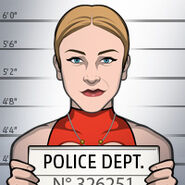 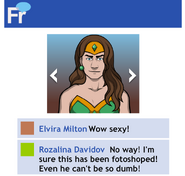 Rozalina and Elvira's Friendnet comments on Jones.
Add a photo to this gallery

Retrieved from "https://criminalcasegame.fandom.com/wiki/Rozalina_Davidov?oldid=408787"
Community content is available under CC-BY-SA unless otherwise noted.