Roxanne was the 342-year-old vampire leader succeeding the late Dr Aculus. She had black eyes, long, wavy brown hair and sported ruby lipstick and matching nail polish. She donned a black leather dress cut to her bust with a matching choker and gold bands. Additionally, she sported a gold hoop earring with appendages on her left ear.

In her first appearance, she disguised herself as a 36-year-old partygoer. It is known that Roxanne was allergic to garlic, drank Bloody Mary, read Byron, owned a bat and took euphoria.

In her second appearance, it is discovered that she drank deer blood, knew ballroom dancing and used Eternal Youth moisturizer.

In her third appearance, her hair was tied back and adorned with an arched golden crown with purple beads. She wore a purple bra with matching sleeves and a golden breastplate depicting two coiled snakes connected by a golden neckpiece. Additionally, her vampire fangs were visible. It is revealed that she took a falls boat tour, drank Niagara Falls cocktails, and had high blood pressure.

At the time of her death, Roxanne let her hair down and sported her earring. She wore a glittery blue and red dress with gold trimming and a red high collar and black high heels. In addition, she sported a gold ribbed choker, a golden cross necklace, and a pair of red opera gloves.

Roxanne became a suspect after Gwen and the player found her bat at the crypt party, leading them to suspect that she was a vampire. She called the victim selfish for disrupting the party with her death before inviting the team for Bloody Maries. When Gwen mentioned the bat, Roxanne scoffed at them for believing the "rumors" that Lucy had been killed by a vampire and revealed to them that she had been called a vampire before.

Roxanne was spoken to again about her dealing party drugs to the victim. When confronted, she played coy, denying offering drugs to the victim and coming across as a predator to Gwen. She took being called a predator as a compliment and told the team that they were welcome to keep a close eye on her.

Roxanne was found to be innocent after the team incarcerated DJ Blood for Lucy's murder. Later, Gwen and the player asked Roxanne if she was dating Gwen's crush after they learned (per Ben) that she had come into contact with her crush's badge. After identifying Gwen's crush as Pierce Cromwell, she laughed at the team for thinking that she was dating Pierce. She then agreed to set Gwen and Pierce up on a date.

Roxanne became a suspect again after Luke and the player found her map to the Grimoire of Bloode, proving her identity as a vampire and that she was looking for the recipe for the elixir of invincibility. During her interrogation, Roxanne admitted to searching for the recipe as she longed to see the sun. However, she claimed that she had failed to find the book. She also denied knowing about the murder.

Roxanne was found to be innocent again after the team incarcerated Eric Zwart for Dr Aculus' murder. Later, Luke and the player asked Roxanne what she knew about the elixir. Roxanne expressed her irritation over the fact that Eric had not shared the recipe with her, revealing that he kept talking about the ground beneath them whispering secrets. She then revealed that she had taken over leadership of the coven and planned to drag the coven into the 21st century. She then gave them some money as a sign of their commitment to honor Chief Arrow's pact with Dr Aculus.

Roxanne became a suspect for the third time after Luke and the player discovered that the victim was planning on interviewing her. She revealed that Ronnie had discovered the vampire coven after following Pierce home. When he asked her to come on his show, she accepted the invitation, telling the team that she had never been shy of the spotlight.

Roxanne was spoken to again about Ronnie's claim that she was his mother after believing himself to be a dhampir. Initially denying the accusation, Roxanne confessed that she was Ronnie's mother, having fallen pregnant with him after a fling with a human. Since the coven did not take kindly to half-bloods, she left Ronnie to be raised by his father. If it was revealed that she had a human child, Roxanne would be removed as leader of the coven.

Roxanne was found to be innocent for the third time after the team incarcerated Wendall Goh for Ronnie's murder. Later, Ben informed the team that Ronnie's body had been stolen from his trailer. After finding the body and performing another autopsy, Ben discovered that the body had been drained of its blood. After occult dealer Reggie Pratt helped Luke and the player find a supernatural device that could find the rest of Ronnie's blood, they discovered that Roxanne had stolen Ronnie's body. She admitted to stealing Ronnie's blood as dhampir blood had strengthening properties for vampires. She told the team that she was only acting in the best interests of her coven, although Luke told her that they would have to inform the vampire council in Transylvania about her actions. They also confiscated the rest of Ronnie's blood.

Roxanne's body was found at the bottom of the supernatural tower with a hole in her heart. Ben determined that the murder weapon was a wooden stake, explaining why Roxanne's skin had grayed. Per an imprint on Roxanne's chest, Ben was able to deduce that she had been deliberately pushed out of the window. The substance in the imprint was a mixture of vegetable oil, mustard seed, vinegar, and human flesh. From this, Ben was able to conclude that the killer ate pickled human remains.

Later, Gwen and the player found a wooden stake in the assembly hall. Priya confirmed that the stake was the murder weapon. After finding black fibers stuck to the weapon, Priya concluded that the killer wore black clothes.

Roxanne's second-in-command, vampire Fabien de la Mort, had arranged a secret meeting to usurp Roxanne, believing that she was an unfit leader. Before her murder, Roxanne had been confronted by the ghost of her son, TrendVidder Ronnie Hawk, about her not turning him into a full-fledged vampire. Roxanne told him that she only cared about his blood and the powers that it gave her, prompting Ronnie to threaten her. Roxanne had angered young witch Avery Mitchell by belittling her, prompting the witch to retaliate by making an anti-vampire sign; Roxanne had also angered wendigo Wendall Goh after she called him a half-demon. Roxanne had also tried and failed to flirt with werewolf Zander Stark.

The killer turned out to be Fabien.

Fabien told the team that Roxanne had approached him to ask for his assistance in her plan to offer her help to the demons in enslaving everyone when they took over. When Fabien refused, she threatened to silence him. He then prepared a wooden stake which he then plunged into Roxanne's heart in the energy orb room when she attacked him. The team then decided to present Fabien to the Alliance, who pardoned Fabien of his crime given Roxanne's allegiance. 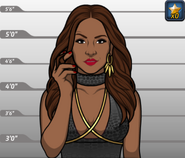 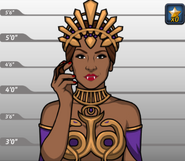 Roxanne, as she appeared in Niagara Fallen (Case #22 of Supernatural Investigations). 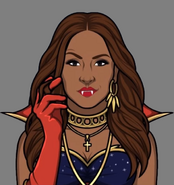 Roxanne, as she appeared in Divided We Fall (Case #29 of Supernatural Investigations). 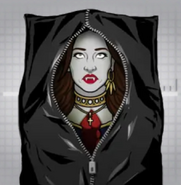 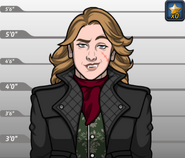 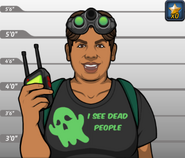 Retrieved from "https://criminalcasegame.fandom.com/wiki/Roxanne_Vega?oldid=535602"
Community content is available under CC-BY-SA unless otherwise noted.