Rowdy Rick was the victim in A Murder Carol (Case #4 of Mysteries of the Past).

Rick was a known miscreant in New Haven with short black hair and brown eyes. At the time of his death, he was covered in dirt stains, and donned a light blue jacket over a brown shirt and a white collar.

Rick was found dead in a dark alleyway, slumped over a wine barrel, with his skull open. According to Dick, Rick was killed by a blow to the head with a heavy object. Furthermore, Dick found the ripped tip of a lottery ticket in the victim's hand, which made the team reckon that Rick and his killer had been fighting over it. This meant the killer played the lottery.

In the gambling room, the team found a bloody brass tap, which was then filed as the murder weapon. Per Rose, the killer had to weigh over 150 pounds to be able to crack Rick's skull with a single blow.

Rick was a gambler and well-known miscreant. On the streets, he aggravated Vinnie Costa when Vinnie saw him talk to the police. He occasionally gambled with Trickster Tim at a gambling den where he was spotted by chimneysweep Pip, leading to their unlikely friendship.

Rick lived in a room which he rented from landlady Maggie Scrubber, but annoyed her when he refused to pay the rent. Rick also worked for moneylender Ezra Bleak as a hired thug, but often refused to hand over the money that he collected.

The killer turned out to be Trickster Tim.

After denying involvement, Tim admitted to the crime. Tim had beaten Rick in a game and the latter refused to pay his debt, making Tim angry. Intolerant to his stubbornness, Tim hit him in the head with a broken brass tap, killing him. Judge Takakura sentenced him to 12 years in jail. 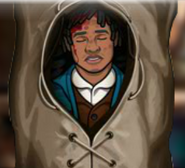 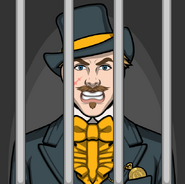 Trickster Tim, Rick's killer.
Add a photo to this gallery

Retrieved from "https://criminalcasegame.fandom.com/wiki/Rowdy_Rick?oldid=451757"
Community content is available under CC-BY-SA unless otherwise noted.