Rose Field was a suspect in the murder investigation of stormchaser Peggy Pascal in The Eye of the Storm (Case #23 of Pacific Bay).

Rose is a 22-year-old environmental activist who has green eyes and braided blonde hair which goes down the right side of her hair. She dons a green raincoat which consists of three badges—one with a tree, one of the Earth, and one that says ♲. She is shown to wear an orange earring on her left ear. It is known that Rose has a cold and drinks tea.

Rose is an environmental activist whose specialty is combating climate change in Pacific Bay.

Rose was in trouble again after the team found a diary entry inside the bunker housing Colonel Spangler's weather controlling machine suggesting the weather could not be controlled, grounds for Amy to suspect an act of counter-productivism on Rose's part. Rose did not want the public to know about such weather controlling machine to be public knowledge as this would be grounds for climate change to be nearly non-existent. Rose would do anything to spin Peggy's findings to ensure her fight for climate change remained intact, but suffered from an intense cold as a result of Hurricane Zelda.

Neither Rose nor her crusade against climate change had anything to do with the largest crime spree of Jazz Town, proving her innocent. 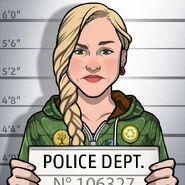 Retrieved from "https://criminalcasegame.fandom.com/wiki/Rose_Field?oldid=466807"
Community content is available under CC-BY-SA unless otherwise noted.