This article is about the minor character. For the main character, see Rose Zhao. For other uses, see Rose (disambiguation).

Rose, appearing as a minor character in Criminal Case, was mentioned during the events of Day of the Dead (Case #49 of World Edition).

Rose is the daughter of Madena Cuervo and her ex-husband. She currently lives in the United States with her father. In a picture of her, she has brown hair underneath a blue cap and wears a crop top saying "I ♥ USA" and blue shorts.

Madena showed a picture of her and Rose to Cindy Hamilton to show her the impact of the wall on families, but Cindy tore it up and said that Mexicans should be kept on their side of the border. Madena said that she loved having motorbike trips with Rose.

In her arrest, Madena said that she rarely spent time with Rose anymore because of where she lived and that the Mexican-American wall would bar her from visiting ever again. She then said that Cindy called Rose a "half-breed" because of her parentage, causing Madena to kill Cindy. 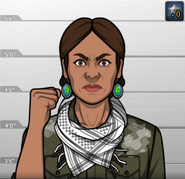 Madena Cuervo, Rose's mother.
Add a photo to this gallery

Retrieved from "https://criminalcasegame.fandom.com/wiki/Rose_(World_Edition)?oldid=518932"
Community content is available under CC-BY-SA unless otherwise noted.