Roman is a 67-year-old (now-retired) architect. He is gray-haired, with his face wrinkled and his neck bones bulging from his skin.

In his first appearance, Roman wears a business suit which consists of a black coat, white shirt, and red tie. He also wears a yellow hard hat and a gold ruby ring on his left ring finger. Additionally, he sports a gold brooch on his right collar and holds four blueprints with his left arm. It is known that Roman plays the violin and eats snails.

In his second appearance, Roman wears a bright yellow polo t-shirt, and has a purple sweater around his neck. He also sports a pair of aviator sunglasses on his head. It is discovered that he is left-handed, smokes electronic cigarettes and uses FilterPix.

Known for designing and constructing the Financial Center and most of modern day Grimsborough, Roman became a suspect after Jones and the player found a destroyed billboard at the crime scene. The billboard had been vandalized with the words, "We Aloki will never allow this!" The detectives discovered that Goldland Inc., a property contracting company Roman was a key figure in, had clashed with the Aloki because the area Goldland wanted to build upscale condominiums in was considered sacred to the Aloki. With Delsin out of the picture, the team needed to interrogate Roman at the crime scene.

Roman said he was not happy about the Aloki picking on him due to Roman having an obsession committing building contracts on what the Aloki considered as being sacred land. Roman would not let anyone rely on the past, but Jones told Roman to have respect for the Aloki because some of the areas used to belong to the Aloki in the past.

Per Anakee, the team went back to the construction site at the woods only to find a mass grave in the construction site; it seemed that Roman was very good in ignoring the past. The team found a notebook with Serena Johnson telling Roman to disregard Delsin and just proceed with the luxury condo project even if Roman might think money would be an issue on his end. This caused the team to interrogate Roman for a second time.

All Roman wanted to talk about was his history with Serena, which did not impress the team, but on the other hand, Roman would be willing to follow Serena's orders to continue with the luxury condo project. Jones countered that Serena wanted Roman to start the project right away in order to cover up the Aloki Massacre incident per Delsin's findings. Roman was not up to the team's discoveries and he felt that the team should stop aggravating him.

Roman was found innocent at the climax of the case, despite his attempts to build luxury condos in what was discovered to be the mass grave. When the team found another evidence of Aloki ownership, the team told Anakee to have all surviving Aloki file with the Bureau of Indian Affairs so that the land could be locked under Aloki custody—at last Roman would not be able to continue with the Luxury Condominium project in spite of hopes of using the crime scene to build luxury condominiums.

Roman became a suspect again after Gloria and the player found his watch at the scene of the crime. After lamenting on the destruction of the Financial Center, he was informed about the murder, where he claimed that he didn't know the victim, but would be happy to supply the duo with any architectural advice that they needed.

Roman was spoken to again about the eviction notice that he had sent to the victim. He revealed that he owned the building that housed the clinic, and that the victim had been several months behind on the rent. After trying to be civil, he gave Greg an ultimatum to either pay the money or get out.

Roman was found to be innocent again after the team incarcerated Richard Harding for Greg's murder. But his advice was later sought out by Jones and the player, who were searching for a way to reinforce the buildings in the Financial Center to avoid mass destruction. Roman advised them to search the Crisis Center for copies of the design specifications of the area and wished them luck before they went. 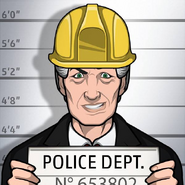 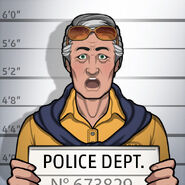