Roger Strout was a suspect in the murder investigations of scuba diver Valerie Green in What Dies Beneath (Case #3 of Pacific Bay) and blogger Becky Walden in The Ice Queen (Case #5 of Pacific Bay).

Roger is a 39-year-old professional underwater photographer and scuba diver who has green eyes, sports a tan, shaved black hair and medium stubble. Roger wears a blue-black scuba diving suit but given his profession, carries a waterproof underwater camera with him.

In his first appearance, it is known that Roger knows scuba diving and drinks champagne.

In his second appearance, he has burn marks on his right hand and it is discovered that he uses a GPS device.

Roger was imterrogated after the player and Amy restored a broken underwater camera at the scene of the murder. After Amy observed the pictures inside the underwater camera, she was able to identify the photographer as Roger Strout. After being asked about it, Roger did not want to cooperate since he felt betrayed by Valerie's lack of trust by breaking a major area of trust—Valerie allowed the partygoers to the place where the corals were at, and because of what Valerie did, Roger's career would be endangered. The team thought that would be a good motive for wanting Valerie dead, but not enough evidence to prove Roger guilty.

Roger was interrogated again after when Mike Herbert claimed that Roger was lying to the team about trust issues Roger had with Valerie, but Roger felt that killing people just to save a beloved career did not fit to his interests. Roger also disclosed that Valerie lived in Pacific Bay all her life, but wanted to leave, and suggested her that she donned the life of a party-goer, which caused trust issues when Valerie was known to have started flirting with Mighty Pete. While it may seem Roger was irate about Valerie's betrayal, he was kind enough to give the team Valerie's toolbox to help catch the killer. Eventually, with the help of the toolbox Roger gave them, the team arrested Mighty Pete for the murder of Valerie Green.

During the Additional Investigation, Yann found a rare shrimp species in the depths of Ocean Shore's exotic waters, and as Yann's daughter Lily placed it back in the sea, it "touched" Roger by accident, prompting the team to have another talk to Roger. Roger was shocked that the team managed to find rare species in the waters, and cordially thanked the team, especially Yann, for saving his career.

Roger found himself in the red when Frank and the player found a speargun with his fingerprints imprinted on them. All Roger could remember was him being at the boardwalk with his pet octopus (which he carried in a special container) but Becky stole the octopus from Roger, and Roger attempted to catch Becky but could not keep up because of her speed. Roger retraced his memories to inform the team he left the speargun at the beach by mistake, but in spite of Roger's lies, the team opted to go to the boardwalk to find additional leads.

Roger was interrogated a second time when the team found out that the octopus was worth a lot of money in the black market, alas Roger needed the cash to sell the super rare octopus to a buyer. Roger had to chase Becky (recalling what he told the team when he was talked to the first time) to get the octopus back but failed to catch her, realizing that his failure could get him in trouble with the bad people of the black market.

Roger's octopus affair did not compare to Derek Stone's wanton hatred of Becky, a reason why Roger was eventually found innocent for another time. 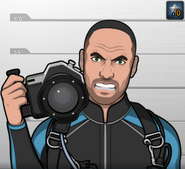 Roger, as appeared in What Dies Beneath (Case #3 of Pacific Bay). 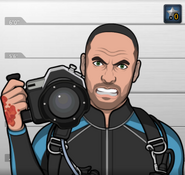 Roger, as he appeared in The Ice Queen (Case #5 of Pacific Bay). 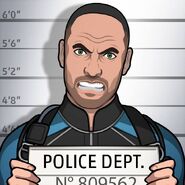 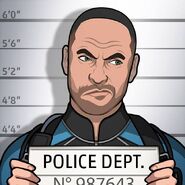 Retrieved from "https://criminalcasegame.fandom.com/wiki/Roger_Strout?oldid=501369"
Community content is available under CC-BY-SA unless otherwise noted.