Riley Davies was a suspect in the murder investigation of the Lone Roses' lead singer, Olly Oliver, in Killing Me Softly (Case #33 of Grimsborough). He also made a cameo appearance in The Rorschach Reaper (Case #41 of Grimsborough).

Riley is a 22-year-old drummer with long blond hair which is windswept backwards. He has bright green eyes and rosy cheeks. Riley is most commonly seen wearing a light green t-shirt which cuts down to his chest. Over this shirt, he wears a beaded necklace with a long decoration in the middle. Around his neck, Riley sports a black scarf with a paisley motif. It is known that Riley is a musician and eats roasted peanuts.

Riley was the Lone Roses' drummer who was interrogated since he was the one who had found Olly's dead body stuffed inside their drumkit on the concert stage. When Jones and the player went to talk to Riley, he was drunk and in a funny mood, so they decided to lock him up until he got his sense back.

A few hours later, the team finally let Riley out and interrogated him. They had proof that he had argued with Olly after the concert was over (Mary Lou Hong had told them about this). They had also found his fingerprints on a beer bottle found on the concert stage which was used to poison the victim. Riley told the team that arguing was not a crime. When asked about the beer bottle, he claimed that Olly had bought those beer bottles from the Diner before the band's concert. Riley further said that it was a group tradition to end their gigs with beer on the stage, so he had handed the beer bottle to Olly after the stage curtain was drawn.

Riley then destroyed his drumset on purpose because the criminal record that had been placed on his name destroyed his passion for music after he was proven innocent following Mary Lou's detainment for Olly's murder. Jones told Riley that he should not be destroying his equipment even though the police detained him for investigational purposes, so the team found Riley's broken tambourine at the concert stage, placed it back together and gave it back to him, although Jones personally thought that with the criminal record, Riley did not deserve to have his tambourine restored.

Riley had a short role in this case after the team successfully examined an empty plate found in the Prom Ball's buffet, in which they only found bits of brownies. Jones thought that it was set up by the reaper and it could have been poisoned. Riley then unexpectedly arrived and stated to the team that the brownies were his. It did not take long for him to notice that Jones looked a bit nervous, which reminded him of Cathy King. 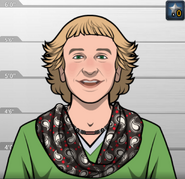 Riley, as he appeared in Killing Me Softly (Case #33 of Grimsborough). 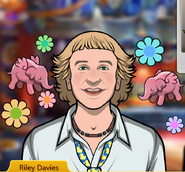 Riley, as he appeared in The Rorschach Reaper (Case #41 of Grimsborough). 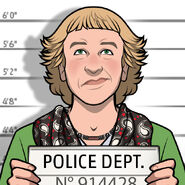 Retrieved from "https://criminalcasegame.fandom.com/wiki/Riley_Davies?oldid=408790"
Community content is available under CC-BY-SA unless otherwise noted.