Rico Damascus was a suspect in the murder investigation of socialite Lindsay Bannister in Murdertown (Case #34 of Pacific Bay).

Rico is a 55-year-old, self-proclaimed European Count. He is bald, has blue eyes, and sports several wrinkles on his forehead. He dons a brown suit over the combination of a matching vest and white shirt with a black bowtie. He is also seen holding a walking cane. Besides that, he wears a Utopian badge and has a pocketful tucked into his right pocket. A Siamese cat is also seen resting on his right shoulder. It is known that Rico drinks gimlets and plays mahjong.

The investigation team of Frank and the player found a dagger scabbard near the Ivywood Boardwalk, with tech expert Hannah analyzing the scabbard to confirm that it was related to the antique dagger used to kill Lindsay. She also made it clear that the dagger was worth a million dollar due to it being an ancient treasure of a royal European family albeit it went missing during a war. Only Rico knew of such, so Frank and the player called him to the station for an interrogation.

Rico was not impressed about being brought to the interrogation room, but Frank wanted the European Count to spill out what he knew about the murder weapon. Switching the subject, Rico demanded that his dagger be given back to him at once; however, the appeal was denied since the dagger was registered as a piece of evidence in the murder inquiry. Finally switching back to the original subject, Rico stated that Lindsay once came to the bar of Ivywood Heights Hotel intoxicated, only to spill drinks on him and steal his prize in retaliation for his rude treatment to her.

As the investigation went on, Hannah researched a fortune teller machine bearing a striking resemblance to Lindsay. The machine stated that Rico was an absolute liar, saying that he was actually born in Pacific Bay's Bayou Bleu. This discovery prompted a second discussion with the so-called European Count. After being grilled to the extent, Rico confessed that he was actually born in the Bayou. He continued by stating that he pretended to be a European Count so he could sell antiques at a rapid rate; however, one day Lindsay got him drunk thanks to the gimlets she made, grounds for Rico to use his Bayou accent by mistake. Lindsay would leak the truth to the public much to Rico's disgust, causing him to sell his antique dagger to the socialite in order to prevent her from outing any such thing about him.

Although Rico seemed to have a strong motive for murder, he was eventually proven innocent when it turned out that Lindsay's murderer tried to frame him with the fortune teller machine.

Rico found himself in serious trouble after private detective Ramirez managed to snap a photo of him stealing an expensive diamond. After verifying the photo's authenticity, the police arrested Rico for stealing the diamond, and later arrested Velma Bannister for plotting the theft – though Velma would be released by her husband on bail shortly afterwards. 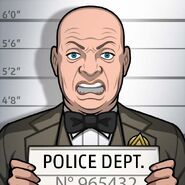 Retrieved from "https://criminalcasegame.fandom.com/wiki/Rico_Damascus?oldid=430240"
Community content is available under CC-BY-SA unless otherwise noted.