Ricky Hillingdon was a suspect in the murder investigation of jazz musician Elmer Buttons in After the Storm (Case #18 of Pacific Bay).

Ricky is a 35-year-old tram driver with green eyes and short wind-swept auburn hair. He dons a blue blazer on top of a purple waistcoat. Underneath his waistcoat, he wears a striped white shirt and a red tie. He also sports a blue tram driver hat with the word "CONDUCTOR" on a dark blue banner. Besides that, he carries a whistle around his neck, and a pen on his left shirt pocket. It is known that Ricky knows music and eats beignets.

Ricky is a tram driver serving in Jazz Town.

Ricky found himself in trouble when he disrupted a conversation between Amy, Yann, and the player as they expedited Elmer's body to Roxie for autopsy. Amy made it clear that the tram line was canvassed for the time being to allow police to investigate Elmer's murder, but demanded Ricky to stay put since the team had some questions to ask him.

Amy enjoined Ricky from selling tickets to tourists while the crime scene was barricaded, but Ricky countered that he wanted to keep his passengers happy by showing where the dead bodies were in spite of the tram service being halted during investigation. Ricky needed tourists to rebuild the economy of Jazz Town due to the devastation of Hurricane Yves as tourism took a steep dive after the disaster--in which he willfully defied police authority.

Ricky found himself in trouble for a second time after the player found a tram ticket (torn and restored) for the Murder Tours following the Jazz Award Ceremony. Ricky stated that those tickets were intended to tour Elmer's murder, but Amy labeled Ricky as a serious suspect as she suspected Ricky of killing Elmer for the love of tram tourism. Ricky told Amy that a tram tour did not warrant murder, but it took a careful evidence blend to confirm Ricky not guilty of grand homicide for now. 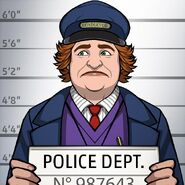 Retrieved from "https://criminalcasegame.fandom.com/wiki/Ricky_Hillingdon?oldid=413810"
Community content is available under CC-BY-SA unless otherwise noted.