Rick Murray was a suspect in the murder investigations of former COSMORUS head Natasha Romanova in The Darkest Hour (Case #56 of World Edition) and actress Savannah Blake in Playing Dead (Case #53 of The Conspiracy).

Rick is a 60-year-old investigative journalist of African-American heritage with brown eyes.

In his first appearance, then 58 years old, Rick wears a brick-red patterned jacket as well as a camera around his neck. He also wears glasses, a black hat, a journalist badge and has a gap between his front teeth. It is known that Rick takes sleeping pills.

In his second appearance, it is discovered that he uses Mr Biceps, has watched Transmutators 9 and uses a Rolington typewriter.

Rick became a suspect after the player and Carmen found his phone where Natasha's body was dumped. He said he had been interviewing people, getting their reactions to the President's kidnapping; then suddenly a van comes by and dumps the body and weapon, then people start panicking. He did not see who dumped the body, but given that it was Natasha he felt the Russians were involved with the kidnapping. Though he did not mind the President being kidnapped, he felt it would be great for business and that he was not that great of a President to begin with.

Rick was spoken to again by the player and Jack about the President being angry with him regarding his works. He felt glad knowing his articles were getting to him, considering he felt that Hewett was unfit to be President and wanted everyone to know it. Considering his policies of building a wall and removing the US from the UN, he hoped the player would never find him. Jack was appalled at Rick's behavior, but Rick was certain anyone could do a better job of being President.

Rick was later found to be innocent after it was revealed that Sarah Bennett was behind Natasha's murder and the President's kidnapping.

Rick became a suspect again after Gloria and the player found his Pulitzer prize at the CCN office. Exchanging greetings with the player, he explained that he had moved to Grimsborough from New York after he sought the need for a quieter life. When asked if he had seen anything suspicious regarding the murder, he claimed that he had only arrived at the office.

Rick was spoken to again about the target he had made of an Upton Abbey poster, the show that the victim starred in. He revealed that he had actually come to Grimsborough because he had been demoted. He had written a scathing piece on the demise of the movie industry, highlighting Transmutators 9, a movie that the victim had starred in as being particularly terrible. In his piece, he claimed that Savannah's performance was terrible, resulting in her suing him for donation, prompting his demotion.

Rick was found to be innocent again after the team incarcerated Clarisse Gold for Savannah's murder. Later, Gloria and the player asked Rick why he wanted former reporter Louis Leroux fired from CCN. Rick branded him as insane and recalled how Louis had stolen his phone prior to the blackout in order to send a text. This led Gloria and the player to realize that Louis had been the one to send the text about human enhancement being the "wrong way". 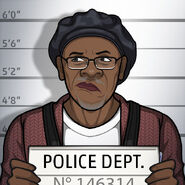 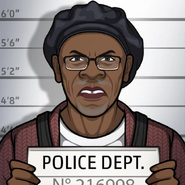 Retrieved from "https://criminalcasegame.fandom.com/wiki/Rick_Murray?oldid=461175"
Community content is available under CC-BY-SA unless otherwise noted.