Rick is a 32-year-old property investor. He has short, wavy red hair, gray eyes and freckles. He wears a lime green shirt under a dark green plaid sweater vest and sports black, circular spectacles. It is known that Rick is left-handed, reads The Spectral Plane and gambles.

Rick became a suspect after Luke and the player learned that he had bought property from the victim. After Rick told the team that Jeremy was planning to transform Black Ridge into a modern community, Luke informed him about the murder. Rick claimed to have only met with the victim a few times in Jeremy's makeshift office, prompting the team to investigate there next.

Rick was spoken to again about the house model that he had destroyed. He revealed that he had bought the property before learning that Black Ridge was a ghost town. When he tried to back out of the deal, the victim claimed it was an urban legend and refused to let him back out of his contract.

In the end, it was proven that Rick was Jeremy's killer. Upon arrest, Rick vehemently denied committing the murder before the ghost of Nathaniel Mason appeared from his body and admitted to the murder. Nathaniel said that a gold mine tunnel that he had built released a poisonous substance to the ground, leading to "the curse of Black Ridge". Since then, Nathaniel's ghost had been killing any visitors to the town to keep people away. Most recently, he possessed Rick to convince Jeremy to stop building property on the town and endanger his clients. When Jeremy did not listen, Nathaniel (in Rick's body) killed him with an ax. Nathaniel then told the team that they had until sundown to leave or he would kill them as well before he left Rick's body. Moments later, Rick recovered and was informed by the team that he was not responsible for the murder. Rick then left to lie down. 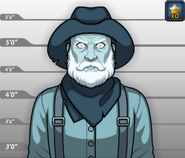 Nathaniel Mason, the ghost who possessed Rick's body to kill Jeremy Cross.
Add a photo to this gallery

Retrieved from "https://criminalcasegame.fandom.com/wiki/Rick_Lewis?oldid=530662"
Community content is available under CC-BY-SA unless otherwise noted.