Richard Harding was the killer of family doctor Greg Gibbs in Flatline (Case #7 of The Conspiracy).

Richard is a 38-year-old plumber. He has short, graying-black hair and stubble. He wears a blue long-sleeved shirt with a tartan pattern under blue dungarees that hold a yellow ruler, a wrench, a screwdriver and a pencil. He additionally sports a yellow GritFit wristband on his left wrist. Furthermore, he holds a red monkey wrench in his left hand. It is known that Richard is left-handed, smokes electronic cigarettes, uses FilterPix and suffers from HIV.

Richard became a suspect after Gloria and the player found the victim's note-to-self to call him. After being presented with the victim's name, he explained that he did the plumbing in Greg's building. Gloria then told him about the murder, to which he responded that he needed to get back to work.

Richard was spoken to again about his HIV treatment, which Gloria and the player discovered was being treated by the victim. He told them that he had never experienced illness before, so when Greg told him that he had contracted the virus, he was devastated. He then revealed that the victim had given his wife a brochure on how to support someone with HIV, which led to his wife, who had yet be told about her husband's illness, leaving him.

In the end, it was proven that Richard was Greg's killer. Upon admitting to the murder, Richard said that Greg had given him HIV by running his blood tests with an infected needle. When he had confronted him, he denied the accusations but later offered him free treatment. Greg also told Richard's wife about his disease, which led to their breakup. Wanting a revenge for ruining his life and family, he went to Greg after the earthquake and slashed his throat, hoping the body would get lost in the rubble. Judge Powell sentenced Richard to 10 years in prison. 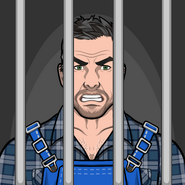 Richard, sentenced to 10 years in prison for the murder of Greg Gibbs. 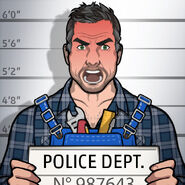 Retrieved from "https://criminalcasegame.fandom.com/wiki/Richard_Harding?oldid=461144"
Community content is available under CC-BY-SA unless otherwise noted.