Richard Dobbs was a suspect in the murder investigation of model Emma Ternon in The Kiss of Death (Case #16 of Grimsborough).

Richard is a 52-year-old plastic surgeon with dark brown hair and eyes. He wears a black t-shirt underneath a white lab coat with the logo of D&D on the right and black goggles hanging from the left pocket. It is known that Richard eats sushi and uses lip balm.

Richard was a plastic surgeon who shared a plastic surgery business with Roger Dence called Dence & Dobbs (D&D). He was called in by Jones and the player to ask him about Emma's services. After further investigation, it was revealed that Richard had not only hired the victim, Emma Ternon, as an escort, but he had also proposed to the victim by gifting her a diamond ring at the Casino's top floor. Unfortunately for Richard, Emma said no to him, which increased the doubt of the police that Richard had killed Emma, but in the end, it was proven that Richard's business partner, Roger had actually killed Emma, proving Richard innocent.

Later, in the Additional Investigation, one of his patients accused Richard of taking drugs while working. After being informed about this, the team went to Richard's, who told them that the rumours were a lie, but the team did not believe him and searched the square's entrance (because they saw him standing next to a open window when they got in) where they then found a red box. Inside it was a cocaine box which had fingerprints on it. After analyzing it, Alex discovered that the fingerprints belonged to Richard. The team then went to Richard and arrested him. 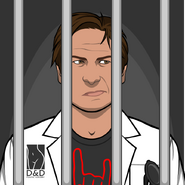 Richard, after he was jailed for using drugs in Additional Investigation. 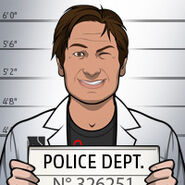 Retrieved from "https://criminalcasegame.fandom.com/wiki/Richard_Dobbs?oldid=488119"
Community content is available under CC-BY-SA unless otherwise noted.