Riaja was a 20-year-old orphan recruited and then experimented on by SOMBRA to become faster. She had long black hair in a ponytail and yellow eyes. At the time of her death, she donned a teal tank top, gray shorts and boots. She also had bruises on her right cheek and the left side of her neck.

Riaja was first spotted by The Bureau in a pre-recorded video meant for the winner of the Hunt organized by Obaasan. She told the winner to go where she was as SOMBRA was waiting for them. Elliot was not able to identify her, but he did manage to find out the video was recorded in Thailand.

Riaja was found on the shore of a beach impaled on a spear through her chest. Angela confirmed the cause of death was a pneumothorax caused by the spear puncturing her lung. Basing herself on the spear trajectory and its position in the body, Angela deduced the killer was left-handed.

During a second visit to the beach, the team found the speargun and filed it as the murder weapon. The speargun had some fibers which, according to Lars, came from a batik print pattern. That meant the killer wore batik.

Riaja's brother Alam had been taking care of her ever since they were orphaned before she disappeared, presumably to partake in SOMBRA's hunt. When she returned, Riaja refused to help him and laughed at some of his interests, angering Alam. SOMBRA psychologist Maya Salim (who was evaluating her as well as the other recruits in the camp) said she was often paranoid, as evidenced by her accusing crocodile expert Paul Irwin of being an agent and knocking him out with a punch. Under the Next Level program, Marshall Metcalf had given Riaja super speed against her will. The local dukun, Mbah Tirta, had witnessed Riaja running extremely fast as a result and so tried to exorcise her.

The killer turned out to be Maya.

Maya admitted she shot Riaja with the fishing spear after she fought SOMBRA's brainwashing and fled the camp (for New Zealand to meet with Baxter Fraser, as the team would learn later) before completing the "next level" program. Judge Adaku sentenced her to 30 years in jail for the murder. 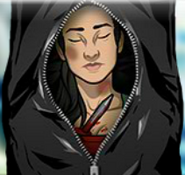 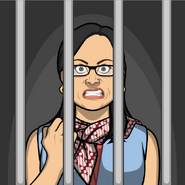 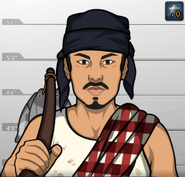 Alam Somalinggi, Riaja's brother.
Add a photo to this gallery

Retrieved from "https://criminalcasegame.fandom.com/wiki/Riaja_Somalinggi?oldid=544152"
Community content is available under CC-BY-SA unless otherwise noted.