Renée Daucourt was the killer of artist Theo Vergeer in That Sinking Feeling (Case #11 of Mysteries of the Past).

Of French origin, Renée is a 24-year-old apprentice of the victim. She has straight blonde hair and wears a headband with a flower ornament on it and beads. She wears a flax yellow dress with white designs with a guano stain and sports a Gigantic pin on her right lapel. She is seen holding a cigarette in her left hand. It is known that Renée suffers from seasickness, knows ballroom dancing and art and went to St. Paul's School for Girls.

Renée became a suspect after the player and Maddie found her ticket to the Gigantic alongside the victim's. She was shocked to hear of the victim's death, and explained she was the victim's apprentice in art, having been taken under his wing a few years prior. The victim had planned to broaden his artistic horizons in Europe, as he and Renée planned to set up a studio in Paris. However, she could not think of anyone who wanted to harm him as she felt he was an artist admired by all.

Renée was spoken to again regarding a box of chocolates she received from the victim. She said those chocolates were an attempt to seduce her, and she was hardly the only woman he was trying to woo. Despite ignoring his advances, Theo just tried harder to do so. However, she would not go as far as to murder him, as she wanted to study art more than she wanted the victim's affections.

In the end, it was revealed that Renée had killed Theo. After denying involvement, Renée admitted to the crime. After being mentored by Theo, Renée had managed to surpass his talent. Theo then had forged her paintings to keep his glory. When Renée confronted him, Theo threatened to break her ticket and prevent her from going to Paris. Angered, Renée smashed Theo's head against an ice sculpture's head. Judge Takakura sentenced her to 20 years in jail. 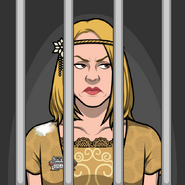 Renée, sentenced to 20 years in prison for the murder of Theo Vergeer. 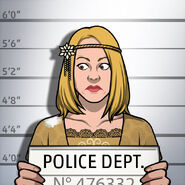 Retrieved from "https://criminalcasegame.fandom.com/wiki/Ren%C3%A9e_Daucourt?oldid=533955"
Community content is available under CC-BY-SA unless otherwise noted.